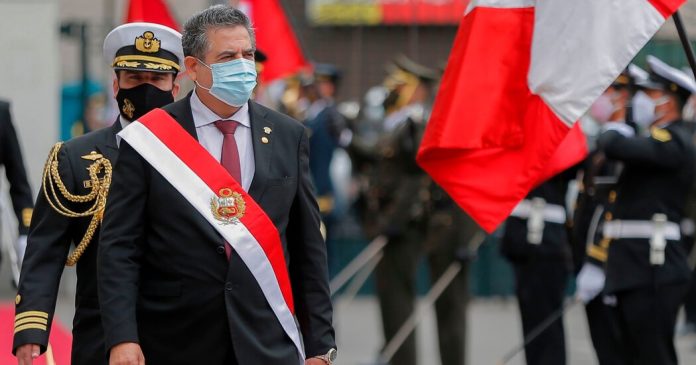 Facing widespread opposition, Peru’s interim president stepped down on Sunday, his sixth day in office, a country already facing an economic tail and a devastating epidemic in a constitutional crisis.

Former president Noel Merino took office on Tuesday, after legislators shocked the nation by voting to oust the popular former president, Martin Vizcarra, and then Congress president Mr Merino was sworn in.

From his first moments in office, Mr. Merino faced opposition from Peruvians, who protested and took to the streets to protest against prominent political and social leaders, many of whom said they did not recognize Mr. Merino as president.

On Sunday, most of the cabinet resigned and after his last political allies resigned, Congress elected him and he vowed to step down. Mr. Merino noticed.

“I submit my offer of resignation,” Mr Merino told the nation Sunday in a video address. “I say for peace and unity of all Peruvians.”

Mr Merino said he would now focus on ensuring a smooth transition to a new leader to avoid a power vacuum. Congress announced on Sunday that it would appoint a new president from among the legislators that day.

However, it is not clear whether the Peruvians will accept Mr Merino’s successor as their leader and end the daily protests that have plagued the country. The nation’s congress is very unusual in Peru – almost half of its members are investigating for corruption and other crimes – and many have blamed its members ’political opportunism for the current crisis.

A majority of legislators voted on Monday to oust then-President Vizcara after protests began on the streets of the capital, Lima, and then in other cities across the country. Removing them, the legislators cited unsubstantiated allegations of corruption and used an archaeological constitutional clause that would have declared Congress incapable of leading the nation morally.

See also  "France will burn this week": a weather reporter changes tone to warn of seriousness of situation (VIDEO)

Mr Vizkara was due to step down after the presidential election in April and promised to face justice after he left office. He won the support of a majority of Peruvians by clearing Peru’s infamous political establishment during his two years as president.