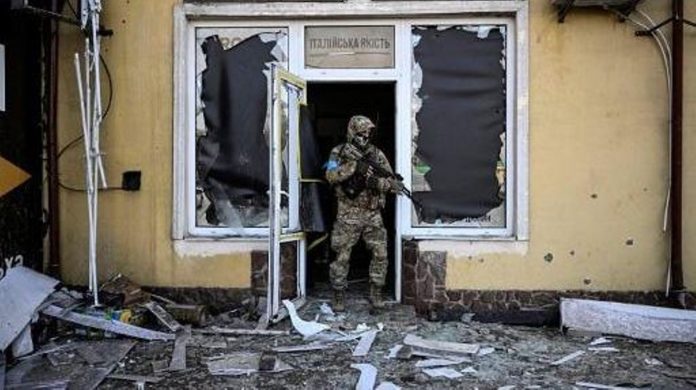 An attack on a large monastery in the Donetsk region injured about 30 people overnight from Saturday to Sunday, while phosphorus bombs struck an area in the Lugansk region, Ukrainian officials in these regions said.

According to Oleksiy Bilochitsky, the police chief of Popasna, located about a hundred kilometers west of Lugansk, the Russians used phosphorus bombs in his area. ,This is what the Nazis called the ‘burning onion’, and this is what ‘Russian+’ (a combination of Russians and fascists, editor’s note) is spreading on our cities. indescribable pain and fire”, he wrote on Facebook.

This information was immediately unverified.

According to the Ukrainian General Prosecutor’s Office, further south, in the Donetsk region, the large monastery of Sviatoguirsk, where about 1,000 people had taken refuge, was hit by the bombing, in which about 30 people were injured.

Earlier, the head of the Donetsk military region said a train ferrying people bound for Lviv in western Ukraine also came under attack on Sunday night.

According to this officer, Pavlo Kirilenko, one was killed and one wounded in the bombing. These areas are parts of the Lugansk and Donetsk regions that “were not part of”.republics“Pro-Russian separatists until the start of the Russian invasion of Ukraine on 24 February.

Find all our articles on the Russian invasion in this folder: