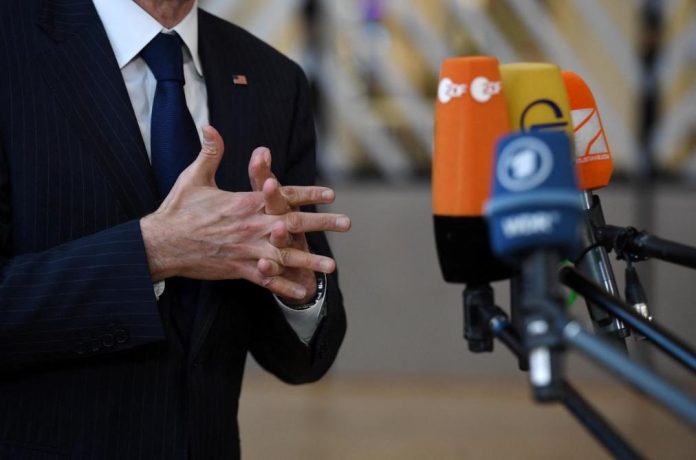 Many foreign media have decided to suspend their activities in Russia

As the law was adopted on Friday, the British BBC announced it was “temporarily” suspending the work of its journalists in Russia to ensure “safety”.

Recognizing that Moscow wanted to “criminalize independent journalism”, Director General Tim Davey decided that “it has no choice but to temporarily suspend the work of all BBC News journalists and their partners in the country.”

“The safety of our teams is of paramount importance and we are not prepared to put them at risk of criminal prosecution just to do our job,” he said.

The BBC will continue to report in Russian from outside Russia.

Many Russians had turned to this medium since the attack in Ukraine. Its Russian news site has seen its audience more than triple in one year, 10.7 million on an average weekly, while the number of visitors to its English site in Russia rose 252% last week to 423,000.

“It is with great regret that we have decided to temporarily suspend our news-gathering work in Russia,” Bloomberg editor-in-chief John Micklethwaite said in an article on his site on Friday.

Russia’s new law “seems to have been written to criminalize every independent journalist, only by union, making it impossible for any form of journalism to survive in the country”, he said.

The US news channel CNN simultaneously announced that it was suspending the broadcast of its programs in Russia “at a time to assess the situation”.

“Deeply concerned”, the radio and television group CBC/Radio-Canada also suspended its activities, believing that the law is intended to “criminalize neutral and impartial journalistic coverage of the current situation”.

Public radio group Radio France, for its part, indicated that it was waiting for legal expertise to decide whether to suspend correspondence with its journalists in Russia.

German public television channels ARD and ZDF decided on Saturday to temporarily suspend their coverage from Moscow, time to “examine the consequences” of the new Russian law.

They will “continue to widely inform the public about what is happening in Russia and Ukraine” from other sites outside Russia, he stressed. ARD has been represented in Moscow since 1956.

In February, German international radio and television Deutsche Welle (DW) was banned in Russia and its journalists were forced to stop working. Access to its Russian-language site, which was still functioning,” was limited on Friday by the Russian media regulator.

Italian public television channel RAI on Saturday suspended the “journalistic services” of its special correspondents and correspondents to protect “the safety of journalists on site and the greatest possible freedom of information”.

“Information about what is happening in the Russian Federation will be made available on the basis of multiple sources of RAI journalists on duty in the central newsrooms in neighboring countries and Italy,” the channel said.

The Efe agency followed suit at the end of the day on Saturday.

Existing with a permanent office in Moscow since 1970, this is the first time that it “sees itself compelled to suspend the activity of its accredited journalists in the Russian capital”, according to the Spanish-speaking Press Agency on its site. underlined. ,

Efe “deeply regrets this grave attack on freedom of expression, a clear attempt by the Kremlin to hide the truth from public opinion”, commented its president, Gabriela Canas.

read also
Alexandre Adler: “Military campaign, like a boomerang, will go from Kyiv to Moscow”

On Friday, Russian authorities also blocked Facebook and began to “restrict access” to Twitter. A day earlier, emblematic radio station Echo Moskvi (Echo of Moscow) announced its dissolution and suspension of its activity to the independent television channel Dodged, after its sites were blocked.