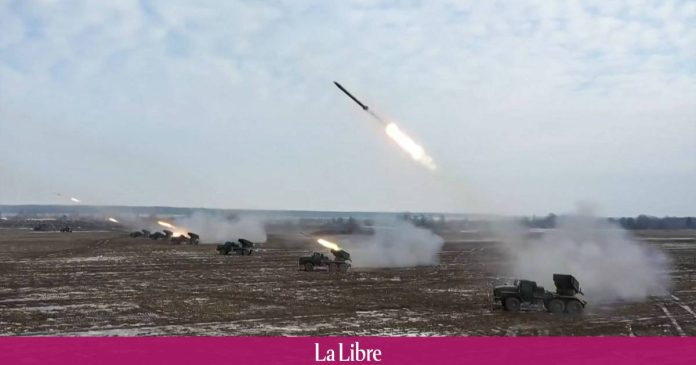 The Kremlin said Saturday Russian strategic exercises under Vladimir Putin’s supervision in the midst of a Russian-Western crisis around Ukraine involved firing “ballistic and cruise missiles”.

“The planned objectives during the strategic deterrence forces exercise have been fully met, with all missiles reaching the set targets,” the Russian president said in a statement.

US Defense Secretary Lloyd Austin said during a visit to Lithuania on Saturday that Russian troops were “deploying” massive amounts of troops to the border with Ukraine and getting “ready to hit” that country.

“They are deploying and preparing to attack,” the US official said, adding that Russian forces are “going to the right position to be able to carry out the attack”.

“We are preparing for all possible scenarios”, launched the Ukrainian minister in Munich to journalists who questioned the latest claims of Joe Biden, who said he was certain of an imminent invasion of Ukraine by Russia. .

However, Mr Austin said the conflict was “not inevitable” and that President Vladimir Putin could have chosen “a different path”.

“The United States, together with our allies and partners, has provided him with an opportunity to find a diplomatic solution. We hope he seizes it,” he said.

The US official also clarified that he agreed with President Joe Biden, who said he was “convinced” that Vladimir Putin had “decided” to invade Ukraine.

“There are a significant number of combat troops, these forces are now deployed and moving closer to the border,” Austin said.

“Having done that, I can tell you that’s exactly what it takes to attack,” said the former general who participated in the 2003 invasion of Iraq.

The Defense Secretary also assured Estonia, Lithuania and Latvia that the United States is “on the side of (their) allies” and that Washington’s commitment to NATO’s collective defense is “unwavering.”

Ukraine is “preparing for all possible scenarios”

Faced with a growing risk that the crisis would escalate into an armed conflict in the heart of Europe, G7 foreign ministers called an extraordinary meeting on Saturday afternoon on the sidelines of the Munich Security Summit.

Ukraine’s President Volodymyr Zelensky has maintained his visit to Munich, where he is scheduled to deliver speeches and hold bilateral talks with several leaders, despite deteriorating tensions.

NATO will strengthen in Eastern Europe in case of Russian attack in Ukraine, warns Kamala Harris

US Vice President Kamala Harris on Saturday threatened to strengthen NATO forces in Eastern Europe in the event of an attack on Ukraine by Russia, and warned Moscow that it would expose itself to “severe and sharp” economic sanctions.

See also  A deserted bungalow in the forest.. Lakh rupees per night.. What is its specialty?

“We will not stop at economic measures. We will further strengthen our NATO allies in the eastern side,” he said during a speech at the Munich Security Conference.

The Kremlin continues to deny any intention to attack its neighbour, but is demanding guarantees of Russia’s security, such as NATO withdrawal from Eastern Europe, which the West categorically refuses.

“Russia says it is ready to negotiate. At the same time, it is undermining the path of diplomacy,” accused Ms Harris, insisting that the withdrawal of troops announced by the Kremlin “was not in line with reality”.

He recalled that the United States has already deployed about 6,000 additional military personnel to Romania, Poland and Germany.

Our forces “will not be deployed to fight in Ukraine”, which is not a member of the Atlantic Alliance, but “they will defend every inch of NATO territory”, he warned.