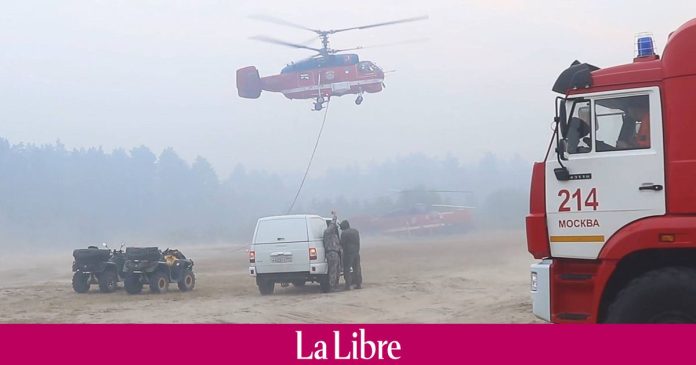 According to the Federal Forestry Agency (Roslekhoz), 850 people and 300 machines, including three planes and helicopters, were deployed to extinguish the fire in the Ryazan region, about 250 kilometers southeast of Moscow.

According to the NGO Greenpeace, based on satellite images, these fires have affected an area of ​​more than 3,300 hectares in recent days. On Telegram, the region’s acting governor Pavel Malkov said on Wednesday evening that at least 800 hectares had been covered by the flames.

On Thursday morning, he said three fires were still ongoing in an area of ​​181 hectares, particularly in the Oka Nature Reserve and Mechchiorsky National Park, in large marshy areas.

In a statement, the Roslekhoz agency accused local forest officials of “hiding the true extent” of the fire, which “prevented the timely mobilization of federal forces”.

The same source said that local firefighters and rangers coming from other areas are currently dousing the fire together or are on their way. The Minister of Emergency Situations, Alexander Kourenkov, is expected to be on site.

“The cause of the fire is unknown, but no thunderstorms or natural causes have been observed in the area, so it is undoubtedly of human origin. Severe soil drought, heat and wind favored its spread”, explained Greenpeace on Thursday. A team of firefighters was sent to the spot.

The NGO specifies that these forest and peat fires concern an area already devastated by severe fires in 2010, the thick smoke of which covered Moscow for several days with serious health consequences.

Another fire has been affecting peat bogs in the Nizhny Novgorod region for several days, Greenpeace says, where it covered more than 6,000 hectares, estimated by satellite images.

An expert on this NGO, Sofia Kosacheva, regretted that it was necessary to wait for the smoke to reach Moscow for the response of the authorities and the media.

“There are a lot of fires in other areas that we don’t talk about (…) People in remote villages are up in smoke for months. Local authorities don’t put out these fires, they do it like they did’ does not exist,” she quoted in a statement from Greenpeace.

With climate change that it is facing in full force, Russia has been hit by severe wildfires in recent years, particularly in Siberia and the Far East, in vast and difficult-to-reach regions.