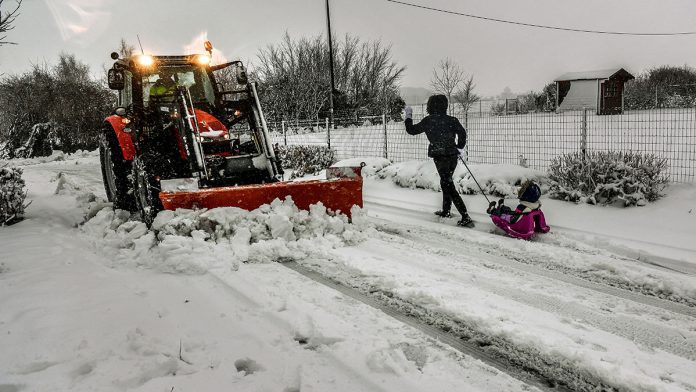 Snow and ice that fell in parts of the country disrupted road and rail traffic in Auvergne-Rhône-Alpes and Lozère on Tuesday, and three people were killed in road accidents in southern Burgundy.

Air traffic should also be “severely disrupted” on departures and arrivals at Paris airports of Orly and Roissy on Wednesday, according to the Directorate General of Civil Aviation, which invites travelers to postpone their travel if possible.

“About 25% of flights in Orly will be canceled this Wednesday and about 20% in Roissy”, said Transport Minister Clement Beaune. The latter also called for “privileged telework” when possible.

Three people were killed in separate accidents on Tuesday morning in Saone-et-Loire, where bad weather made roads slippery, according to the local Center for Traffic Engineering and Management (CIGT).

The department was part of the regions kept by Meteo-France on alert from Monday to Tuesday night, along with Loire, Ain, Savoie, Haute-Savoie and Rhône. Traffic was disrupted in the Auvergne-Rhône-Alpes region on Tuesday morning.

“Due to a slippery road incident, and despite the uninterrupted rotation of salty machines since yesterday afternoon” (Monday), traffic was disrupted for several hours on the A7 motorway between Bourg-les-Valence and Tain-l’Hermitage (Drôme) towards Lyon, according to Vinci Autoroutes. The two heavy freight vehicles in question were “in difficulty”, blocking traffic in the Valencia sector. Several traffic jams have been observed on the roads of the Rhône-Alpes region.

In Lozère, the A75 was cut off in both directions in the early morning due to two heavy goods vehicle accidents. One of the overturned trucks on a viaduct west of Mende was hit by a van at around 3.30am last night. Sorry had to be expressed for the three injuries.

Traffic gradually resumed in these areas later in the afternoon, but with significant deceleration.

In the Metropolitan City of Lyon, all buses remained in the depot for a good part of the morning to avoid accidents.

School transportation lines were also severely disrupted, despite a “winter maintenance system” imposed by the metropolis, which made it possible to salt roads at night on the main axes. According to the Transport en Common Lyonnais (TCL) network, bus traffic resumed at noon but was still disrupted.

For the TER, weather conditions affected “all lines in the region (Tuesday) morning” with “many delays and cancellations”, with SNCF indicating that it planned a “gradual restoration” of traffic on most axes by late morning. Was.

Further south, in Cevennes, 1,200 homes in eleven municipalities in the department and Gard were without power due to heavy overnight snowfall, we learned from Enedis.

“Enedis teams make every effort to find the fault in the area and restore power as quickly as possible,” said a press release from the public service company. “The restoration of the lines is planned between 3:00 pm and the end of the day,” Enedis told AFP.

Bison Foote called on motorists to be careful, Meteo-France has placed 33 departments on orange alert for snow and ice, starting at 6:00 p.m. Tuesday and all day Wednesday.

In these départements, forming a line from Brittany to Alsace through Paris, the risk of sleet is high with the presence of freezing rain and snow (up to 10 cm locally expected).

Among the regions concerned is Ile-de-France: The region’s prefecture asked all its residents on Wednesday to limit their movements and support teleworking.

As a precautionary measure, RN 118, the main access axis to the capital from the south, is closed to traffic from 10:00 pm on Tuesday night.

As for school transport, they will be suspended on Wednesday in Meuse, Moselle, Meurthe-et-Moselle, Vosges and Haut-Rhin, it was indicated by prefectural sources.