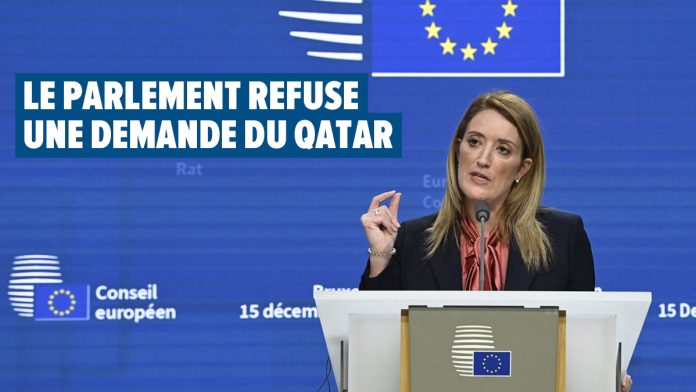 Doha warned on Sunday that the European Parliament’s measures against Qatar would have a “negative impact” on relations with the gas-rich emirate and global energy supplies. The response comes after a request by the European Parliament to block access to the assembly in the context of an alleged corruption case.

The launch of an investigation in Brussels specifically targeting Greek MEP Eva Kelli, suspected of being paid by Qatar to protect the interests of the country which currently hosts the World Cup, has shaken the institution .

In Strasbourg on Thursday, MEPs voted almost unanimously for a text in which they ask “urge the suspension of access passes of representatives of Qatari interests“Time to investigate. The decision rests with the President of the European Parliament, Roberta Metsola.

,The decision to impose such discriminatory sanctions on Qatar, limiting dialogue and cooperation before the end of the legal proceedings, will have a negative impact on regional and global security cooperation as well as ongoing discussions on global energy scarcity and security.A Qatari diplomat reacted on Sunday.

Qatar is one of the main producers of Liquefied Natural Gas (LNG) in the world along with the United States and Australia. Since Russia’s invasion of Ukraine, it has been increasingly sought by European countries to seek alternatives to Russian gas.

Saying they were “shocked” by the alleged acts of corruption and money laundering, MEPs also decided to suspend “All work on legislative files related to Qatar“, First of all they concern the liberalization of visas for Qatar and Kuwait, as well as an agreement on aviation.

Qatar, whichstrongly disapproves“the charge against him, alas”Decision on the basis of wrong information revealed in the leak without waiting for the conclusion of the investigation“, the Qatari diplomat said in a press release. Although it is not the only country cited in the investigation opened by Belgium, it is the target of criticisms and attacks”.Only“Qatar,” he said.

Responding to a reporter, Parliament Speaker Roberta Metsola said on Thursday that she “Two meetings with representatives of the Qatari government in Brussels“and be”Refuse“Gulf country’s request to address the European Parliament.

She also stated that she declined Qatar’s invitation to participate in the FIFA World Cup, citing “concern of this country,

Macron will attend the final

The Emirates’ alleged involvement in the scandal, and several controversies at the Mondial – regarding respect for human rights or the ecology – have not deterred French President Emmanuel Macron from going to Doha to attend Sunday’s final between France and Argentina. , He had already taken part in the France-Morocco semi-final on Wednesday.

In a statement issued on Sunday, Qatar outlined its ties toSolid“With many countries in the European Union, its expression”Gratitude to those who have demonstrated their commitment to these ties in the face of the current wave of attacks,

On the other hand, the Emirates condemned the lack of cooperation from the Belgian government, of which it said it was a partner.close” And “a major supplierof Liquefied Natural Gas.