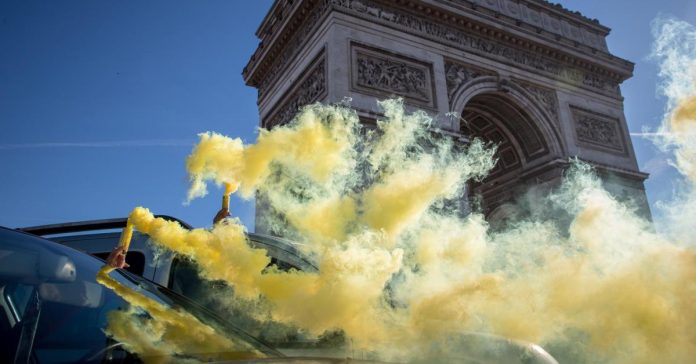 Police used tear gas on Saturday afternoon to disperse protesters from an Antipass convoy found at the Champs-Elysées in Paris, according to an AFP reporter.

Thousands of anti-vaccine opponents from across France, known as the “freedom convoy,” joined Paris on Saturday aimed at demonstrating despite restrictions from police headquarters, determined to prevent any blockages.

At around 2:00, more than a hundred vehicles had joined the avenue, motorists, some now walking, waving flags or chanting “Azadi”. The situation turned tense: tear gas was used.

Police cleared pedestrians around the Arc-de-Triomphe, before slowly pushing protesters into the gardens at the other end of the capital’s famous artery.

“We were in Paris like Trojan horses since 5:00 pm yesterday. We were invisible, we wanted to blend in. I am a ‘yellow vest’ but the number of first time performers is huge. At 1:15 pm, we decided to meet around Arc-de-Triumph because we knew there were several convoys. The car convoys were a test. Today we have other protesters coming. We can’t vaccinate by force,” Laure, 57, a driving school instructor in Seine-et-Marne, told AFP “against vaccination passes”, running on tear gas on the Champs-lysées.

“Even if Macron doesn’t want it, we are here, for the honor of the workers and for a better world”, sang the demonstrators before they dispersed.

Cars, motorhomes and vans left Nice, Lille, Strasbourg, Vimy (Pas-de-Calais) or Châteauburg (Ille-et-Vilaine) on secondary roads for two or three days at low speed to reach the capital city. was traveling for.

After camping at the gates of Paris on Friday evening, some participants – 3,000 vehicles for 5,000 protesters according to police – joined the Paris Ring Road on Saturday morning, where 337 people were fined around 2:30 p.m. Was. Participation in an unauthorized demonstration”, according to the Paris Police Headquarters (PP).