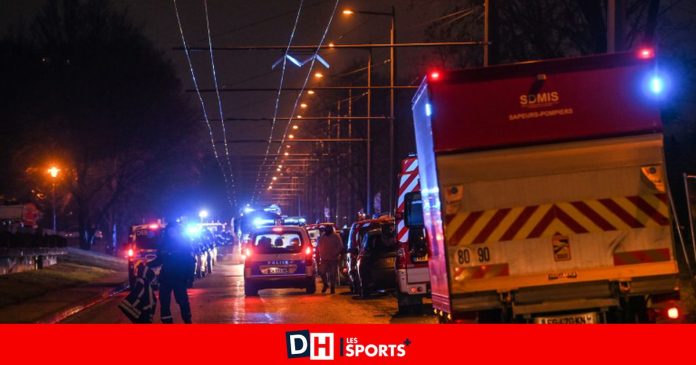 “It is a blow, the consequences are extremely serious (..) I spoke with the President of the Republic”, he said before leaving the Paris Prefecture to go there.

The disaster, whose “origin is unknown” is “now extinct” according to a press release from the prefecture.

According to an AFP photographer, rescuers were busy on the scene with ambulances, trucks and flashing lights. A large security perimeter has been deployed in the city, located in a district undergoing urban renewal.

According to firefighters, the flames started spreading from the ground floor upwards, trapping some residents in their homes, while smoke spread to common areas.

“It was horrific,” Mohammed, a cousin of a man who lived on the fourth floor, told AFP.

According to testimony broadcast by BFM-TV, neighbors heard screams and tried to save lives.

A search is on to determine the cause of the fire, according to a spokesman for the prefecture on site.

According to the same source, the fire broke out shortly after 3 a.m. in a seven-story building located in a block of buildings, and about 170 firefighters and 65 vehicles were mobilized. The intervention took place “under difficult circumstances”, according to Mr Darmanin.

According to the prefecture, two firefighters were slightly injured during the intervention. AFP noted at the scene that a large gendarmerie system has been deployed on the ground.

A fire broke out in the Mas du Toureau district, in the midst of urban renewal after long symbolizing a neighborhood under stress in the Lyon suburbs. The metropolis launched a 100 million euro program in the early 2000s to rethink what would become an eco-district, develop local shops, and develop public transport.

According to the prefecture, Olivier Klein, the minister’s representative for cities and housing, should join officials on site in the morning to take stock of the situation.

On the spot, a resident of the district testifies on the microphone of our colleagues from BFMTV and states: “These people left us in very difficult conditions”, before continuing: “The buildings may not recover at all.. .. I have tears when I think of these victims”.