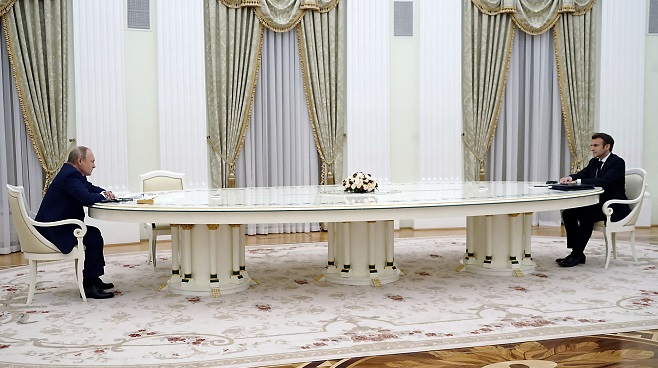 The Kremlin explained on Friday that the long table separating Vladimir Poutin from Emmanuel Macron during an interview on Ukraine was intended to respect a sanitized distance after the French president refused to submit to a COVID test in Russia. .

Images of the two presidents sitting at either side of the six-metre-long white table sparked many comments, with some seeing it as a sign of Mr Putin’s coldness towards Mr Macron, whom he received in the Kremlin on Monday.

Asked by a journalist whether Mr Macron had in fact refused a PCR test when he arrived in Russia, Kremlin spokesman Dmitry Peskov replied in the affirmative.

“Some follow their own rules (…) but in this case, a health protocol is implemented to protect the health of our president and his host,” Mr Peskov said.

“If doctors on both sides negotiate, it is possible to reduce the distance”, he said, explaining interviews where Mr Putin appears to be physically much closer than Mr Macron.

“There are no political views on this subject” and physical distancing “does not interfere in any way with the conversation”, he insisted.

Since January, the Hungarian prime minister and two of Russia’s allies, Iranian President Ibrahim Raisi, have also been seated at a large six-metre table.

Sanitary measures have been significantly strengthened in the Kremlin since the start of the new coronavirus pandemic. Journalists are subjected to multiple screening tests before the press conference and Mr Putin, 69, is regularly seen several meters away from his hosts.

Mr Macron’s visit to Moscow on Monday was aimed at de-escalating tensions between Russia and Ukraine, which have been rising in recent months.

According to the Daily Mail, President Macron did not want to give the saliva sample for fear that Russia would use his DNA. Russia has massacred more than 100,000 soldiers along Ukraine’s borders and the West accuses the country of preparing an attack, which Moscow denies.