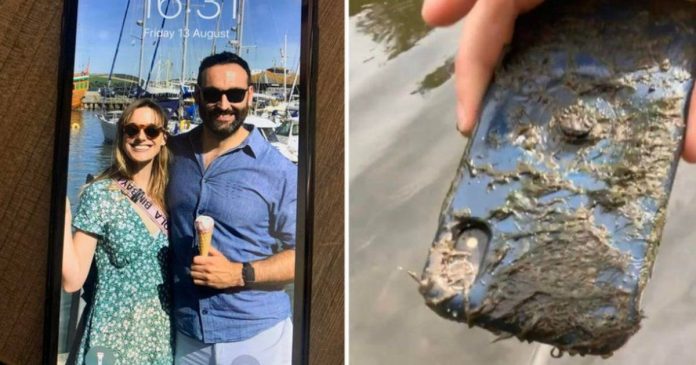 Owen Davis dropped his iPhone XR in a river in England while canoeing in August 2021. Little did he know that ten months later he would get his smartphone in perfect working condition. An incredible story.

Owen Davis, a young man from Edinburgh, Scotland, attends a bachelorette party in August 2021. In the Program: A canoe trip on the Wai, one of the longest rivers in the United Kingdom. An eventful ride ever since Owen found himself in the water because of his partner, as he tells the BBC. His iPhone XR, which was in his back pocket, was missing.

Ten months later, Miguel Pacheco of Drybrook, Gloucestershire, was also canoeing with his daughter on the Wai when he saw a ‘blue object’ in the water, which turned out to be an iPhone. Miguel retrieves the damaged smartphone and takes it home to be dried using an air compressor. “I told myself that if I lost my iPhone, which contained many pictures of my children, I would like to fully recover it”, Miguel explains to justify his gesture.

and there was light

The next morning, Miguel couldn’t believe his eyes when the screen of the iPhone, which had been in the river for almost a year, lit up after charging. A photo of a couple appeared in the background, and the date displayed was Friday, August 13, 2021, the day he went overboard.

Miguel Pacheco posted an ad on Facebook to find the owner of the iPhone. Problem: Owen Davis hasn’t been on social media for months. The publication was widely shared, yet it reached friends of Owen and his fiancée, who recognized the couple directly on the phone’s wallpaper.

Owen said he was impressed by Miguel’s efforts to restore his iPhone to working condition and then return it to its owner.