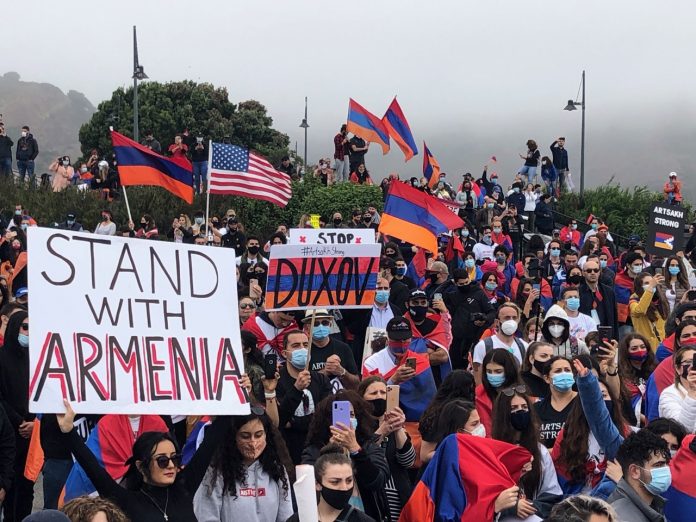 Thousands marched on the Golden Gate Bridge on Saturday, drawing attention to the conflict in the Nagorno-Karabakh region involving Azerbaijani and Armenian forces.

About 3,000 people attended the event, with no incidents reported.

Armenia and Azerbaijan agreed on a Russian-brokered ceasefire in Nagorno-Karabakh starting Saturday, but immediately accused each other of derailing the deal in a bid to end the worst hostilities in the separatist region in more than a quarter-century.

Both sides blamed it for breaking an effective fight with new attacks from noon (0800 GMT).

The ceasefire was announced overnight after 10 hours of talks in Moscow, sponsored by Russian Foreign Minister Sergei Lavrov. The deal stipulated that a ceasefire should pave the way for negotiations to resolve the conflict.

If a ceasefire is reached, it would mark a major diplomatic uprising for Russia, which has a security pact with Armenia but maintains warm relations with Azerbaijan. But the agreement was immediately challenged by mutual claims of breach.

Shortly after the ceasefire was enforced, the Armenian military accused Azerbaijan of firing on an area near the southeastern Armenian city of Kapan, killing one civilian. Azerbaijan’s Defense Ministry denied the Armenian allegations as “provocations”.

The Azerbaijani army in turn accused Armenia of attacking Azerbaijan’s Tartar and Agdam territories with missiles and then attempting to attack the Agder-Tartar and Fizuli-Gabriel areas. Azerbaijani Foreign Minister Jehun Bayramov accused the “conditions for enforcing a humanitarian ceasefire” are currently missing “amid continued Armenian firing.”

See also  2.5 billion euro fine for a Canadian gold mine

The Armenian Defense Ministry denied any fighting violations by the Armenian army and said in the evening that despite Azerbaijan’s “provocations” the fighting was “holding on to a large extent”, to which Armenian troops responded.

The latest wave of fighting between Azerbaijani and Armenian forces began on September 27, and hundreds of people were killed in the biggest conflict in decades since the conflict ended in 1994 on Nagarno-Karabakh. The region is in Azerbaijan but is under the control of ethnic Armenian forces backed by Armenia.