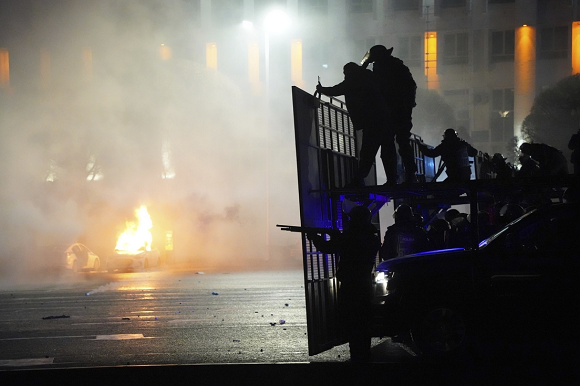 Moments of greatest tension have been in the country’s old capital, Almaty, where an angry mob stormed the administration building and the former presidential residence on this day, setting the regional government’s headquarters and public buildings on fire. Prosecutor’s Office and Kazakhstan State Channel.

The first released images of the consequences of vandalism at the Kazakh Almaty airport show millions in damage to public and mainly private property.

There is chaos in the city itself, shops were looted and cars were burnt, not only the police. There are also many armed masked men. An extremely dire situation is arising in Atyrau, where the mob confiscated a police unit and confiscated the weapons kept there.

A protester was shot in the head in Atrau itself and the news is being actively disseminated by opposition resources.

Almaty police reported that the protesters burned 120 cars, including 33 police cars, and they destroyed 120 stores, 180 restaurants and cafes and about a hundred offices.

Amid the protests, local residents organized checkpoints on the outskirts of the city, where they stop military vehicles and force soldiers to remove their uniforms, while people gathered in the central square to pray and sing. There is a curfew throughout Kazakhstan between 23:00 and 7:00 am.

Operator Kazakhtelcom cut off the Internet throughout the country, although it is reported that access is gradually being restored in various regions, including Aktau and Almaty.

There are media reports that police officers are systematically dispersing protesters from Pavlodar’s central square, without excessive force but resoluteness.

The security forces managed to suppress the unrest in Pavlodar and gradually the situation stabilized.

Some of the characteristics of these “color revolutions” are that the initial demands disappear completely and then give rise to senseless riots where government and police buildings are targeted. It also happened in Ukraine, Belarus, Nicaragua, Venezuela, Bolivia and Cuba.