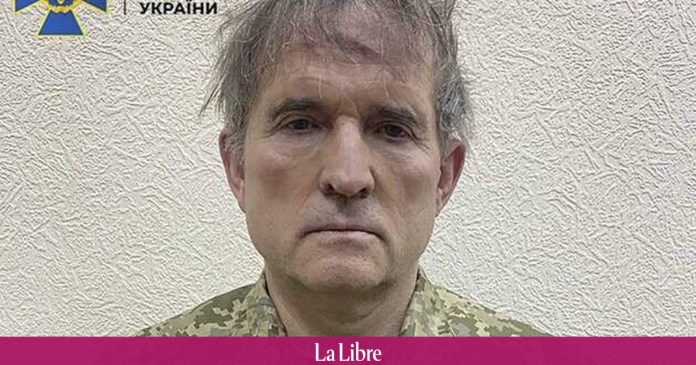 Ukraine’s Viktor Medvedchuk, who was arrested by the country’s special services on Tuesday while on the run since the Russian invasion, is Vladimir Putin’s man in Ukraine, where he has defended the interests of his Kremlin friend for more than 20 years. has done.

Handcuffed, scattered hair, in Ukrainian military uniform, sitting in a chair that looks like an old office: multi-millionaire, 12th fortune of Ukraine with $620 million according to the magazine Forbes And the photo published Tuesday evening by President Volodymyr Zelensky, once one of the country’s most influential figures, appears to be only a shadow of himself.

The announcement of the arrest of this deputy, one of the most hated politicians in Ukraine, especially for his relationship with the master of the Kremlin, caused an outburst of joy on social networks.

President Zelensky offered to exchange it for Ukrainians captured by Russian forces, but the Kremlin shrugged off the idea.

According to Mr. Medvedchuk, his relationship with Vladimir Putin “Evolving for 20 years”. “I don’t want to say that I take advantage of this relationship, but it’s part of my political arsenal”he told American magazine in 2021 time,

The two met in the early 2000s, when former KGB member Vladimir Putin was elected President of Russia and Mr. Medvedchuk, a lawyer suspected of working for the KGB, headed the Ukrainian presidential cabinet.

In this position, he was accused of organizing large-scale electoral fraud in favor of a pro-Russian in 2004, which launched First Ground, a pro-Western insurgency.

Openly supported by Moscow, his opposition Platform Party – For Life came second only to President Zelensky’s party in the legislative elections.

But in February 2021 the horizon starts to darken. Pro-Russian channels owned by him have been banned, his assets and pipelines he owned have been confiscated and, in May 2021, he is being charged with “high treason”.