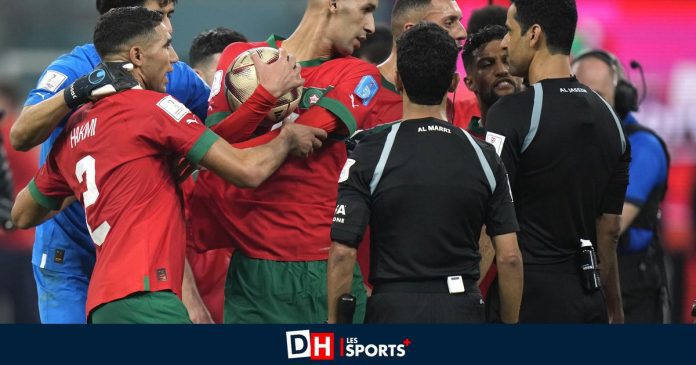 The Reason? During the meeting the Atlas Lions were clearly not happy with the mediation of the Qatari al-Jasim. Hakimi and his companions went straight to him to report their disappointment. It was goalkeeper Yacine Bounou, who intervened to calm things down.

After a while, Moroccan coach Walid Regragui again explained the altercation with the referee.

Tensions rose particularly towards the end of the match, when in the 75th minute the referee did not award a harsh penalty to Morocco after Amarbat fouled Guardiol.

“It’s Not the Moroccan Way”

According to several media, Achraf Hakimi then directly attacked the FIFA president. Leaving the field, the Moroccan defender would have come face to face with Gianni Infantino in the players’ corridor leading to the stadium. At first angry, the PSG player then calmed down and apologised.

For his part, Moroccan coach Walid Regargui returned to the controversy by criticizing his players’ attitude during the post-match press conference. “It’s not the Moroccan way,” he said. He said, ‘When the game is over, we sometimes overreact. You are always disappointed when you lose a match. My players are very ambitious, but it was not a lack of respect”, he still defended.

See also  Asia-Pacific allies have signed a huge trade deal with China while the U.S.