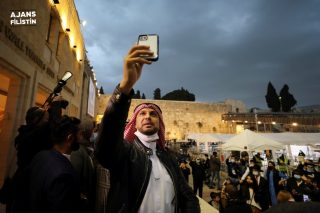 Aljazeera.com. Di Jalal Abukhater. Emirates can now easily travel to Israel, but we Palestinians still do not have freedom of movement in their homeland. (From InvictaPalestina.org). For many people around the world, the past year was full of difficulties and disappointments. But it was even more difficult for us Palestinians: we were forced to face a deadly epidemic in a state of apartheid, a crumbling economy and a general sense of despair and abandonment.

In the second half of the year, several Arab states exacerbated our collective misery by announcing their decision to normalize their relations with Israel. By renouncing his alleged pledge to advocate Palestinian self-determination for money, weapons, and some short-term political gain, he sent us a clear message: Our grief and struggle for the most basic human rights no longer matters to him. .

While every normalization agreement made by Israel with an Arab state has undoubtedly hurt us, none of them have been as painful to us as signed by the UAE. Following the agreements, popular discontent was evident on the streets of Morocco, Sudan and even Bahrain. We knew that the popular people of these countries were strongly opposed to the decision taken by their political leaders, and it was a consolation for us. But the situation was different in the United Arab Emirates. The Emirate has spoken strongly at all levels of its society, from political leaders to ordinary citizens, in favor of an enthusiastic and welcoming relationship with Israel.

The most shocking and happy event in the frenzied love affair between the United Arab Emirates and Israel was the mutual visa waiver agreement, the first of its kind between Israel and an Arab country. After the agreement was signed, UAE and Israeli Airlines were quick to announce direct flights between the two countries. Here, we thought, Amiri is coming!

See also  Tari: In Rome you can use the App . can also pay through

And they came, with much publicity and publicity. Photographs of Israeli tourists in their traditional clothing with Israel in historic Jerusalem were published in newspapers. The Israeli government has begun sharing Emirati testimony, detailing how they feel “safe” in the country on their official social media.

But hardly anyone has thought what we Palestinians thought of all this.

The arrival of hundreds of Amiris in Israel was a slap for us to enjoy the historical sites of Jerusalem and pray in the Al-Aqsa Mosque. After all, millions of Palestinians living in the West Bank and Gaza, two dozen kilometers from Al-Aqsa, can only dream of setting foot in the mosque, the third holiest site in Islam.

Of course, we Palestinians in Jerusalem were already used to seeing Muslim pilgrims from other non-Arab Muslim-majority countries in Turkey, Malaysia, Indonesia or Al-Aqsa. Over the years, Palestinians had hardly any problems with these visitors, as they firmly believed that this holy mosque should not be monopolized by any subset of Muslims, even in the disastrous circumstances of an occupation. I also.

But the Palestinians in Jerusalem do not see Emirati tourists like everyone else. While some still believe that all Muslim tourists, whatever their citizenship, should be welcomed in al-Aqsa, many others have opposed Emirati tourists who are easily disowned at the holy sites of Jerusalem for treachery The right to go formed an alliance with the Palestinians and their oppressors.

We have every reason to be disappointed when we see tourists from the Emirates and Bahrain, who, under the patronage of the Israeli police, walk freely around Jerusalem, take photos and buy souvenirs as if they were just another tourist Going to the site

To begin with, and this may seem unbelievable to those unfamiliar with our reality, the Israeli occupation regime denied millions of Palestinians living in Palestine not only to Al-Aqsa, but to all of Jerusalem . Over the past two decades, Israel has built a complex system of barriers, supported by the apartheid wall, to deprive Palestinians of freedom of movement within their homeland. An entire generation of Palestinians in the West Bank and Gaza grew up in al-Aqsa without a foothold.

And this Israeli “travel ban” affects not only Palestinians living in Palestine. Palestinian refugees and migrant members living in neighboring countries are still denied the right of return, even for short journeys.

Another source of frustration is the fact that Amiritas can now take a direct flight from Dubai to Tel Aviv and enter the country independently. And Israel can now fly directly to the Emirates, with almost no questions asked. This is not possible for most Palestinians. For example, a Palestinian living in Ramallah would first have to cross Jordan and then fly from Amman’s Queen Alia Airport to reach Dubai. A difficult journey, involving several outposts and taking almost a full day. Even Palestinians holding US passports cannot fly to Tel Aviv Airport if they too are in possession of a Palestinian ID card. So you can understand that the visa-free travel between the UAE and Israel is troubling many of us, natives who are denied equal rights in our motherland.

I do not think that anyone, including us in Palestine, is entitled to unconditional love and support from any nation. But Emirates are not brave enough to say that they do not care about us and they do not support our fight. Instead, they repeatedly claim that normalization between the UAE and Israel would ultimately be “beneficial” for the Palestinians. I find it hard to see any logic in this notion. All current evidence indicates that these normalization agreements encourage Israel and its apartheid. After all, no one is challenging Israel over its long-standing illegal occupation of the generalized state, and in particular the UAE, of the Palestinian territories or the inhumane treatment of its Palestinian citizens and its occupying subjects.

This is a criminal injustice inflicted on us by Israel: We have no freedom of movement in our historic homeland. We cannot support an Emirati citizen who has the right to enter and exit our lands at our expense, while we remain in open air jails and struggle to survive under the illegal occupation of Israel Huh. Whatever Arab leaders say can normalize relations with Israel, their actions are not intended to help peace and none of these agreements will ever benefit the Palestinians. Those sovereign countries elected to sign those agreements to serve their national interests; They have no Palestine in mind and should be honest about that fact.

The views expressed in this article are those of the author and do not necessarily reflect the editorial position of Al Jazeera.

Jalal Abukhtar is a Jerusalem. He holds a Masters in International Relations and Politics from the University of Dundee, Scotland.

(Cover image: A delegation from ‘Sharka’, a member of the United Arab Emirates and Bahrain, took a selfie on December 14, 2020, visiting the Western Wall, the holiest place of Judaism, in the Old City of Jerusalem. [Ammar Awad / Reuters]).