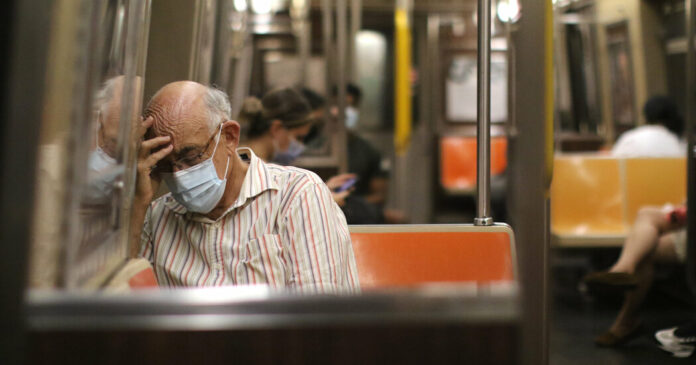 Facing a staggering financial crisis and a stalemate in Washington, the Metropolitan Transportation Authority threatened on Wednesday to adopt a doomsday plan if it did not receive as much as $12 billion in federal aid, including slashing subway and bus service in New York City by 40 percent.

The plan paints a bleak picture for riders: Wait times would increase by eight minutes on the subway and 15 minutes on buses; Long Island Rail Road and Metro-North trains would run at 60- or 120-minute intervals. Upgrades to the subway’s signal systems, which have been the source of many delays, would be scrapped.

The M.T.A. — which runs the city’s subway, buses and two commuter rails — laid out the plan as part of a broader political strategy to pressure Washington to provide assistance.

The agency is facing a staggering $16.2 billion deficit through 2024, after the coronavirus pandemic wiped out its operating revenue — which comes from fares, tolls and subsidies — virtually overnight. Ridership on the subway, which plummeted by 90 percent in April, has only reached a quarter of usual levels, even as more and more New Yorkers return to work.

The state-run transit agency has requested $12 billion in aid to cover its operating losses through 2021. But after negotiations over the next stimulus package stalled this month, immediate federal support did not appear to be forthcoming.

“The future of the M.T.A. and the future of the New York region lies squarely in the hands of the federal government,” the authority’s chairman, Patrick J. Foye, said on Wednesday. “Without this additional federal funding, we will be forced to take draconian measures, the impact of which will be felt across the system and the region for decades to come.”

The plan, which transit officials have said the agency would not enact before next year, is the first detailed depiction of what the sprawling public transportation network and backbone of the New York region’s economy could look like in the wake of the pandemic and the current financial crisis.

Hallmark infrastructure projects, like extending the Second Avenue Subway into Harlem and connecting commuter trains to Manhattan’s west side at Pennsylvania Station, would be paused indefinitely. Purchasing a new fleet of electric buses and new subway cars, as well as adding elevators to stations to make them more accessible, would also be indefinitely delayed.

In addition, the agency would eliminate a widely hailed program that provides accessible vehicles on demand to paratransit customers. Fares and tolls would be raised by one percent and one dollar, respectively, above already scheduled increases in 2021 and 2023.

Talks between Democrats and administration officials over the details of another coronavirus relief package stalled earlier this month and have remained in a political stalemate, with negotiators unable to reach an agreement on the overall scope and price tag of the package.

The $3.4 trillion legislation approved by House Democrats in May included $15.75 billion in grants for transit agencies, while the $1 trillion offer introduced by Senate Republicans last month did not include a similar allocation in aid. It was unclear how much of that would go to the M.T.A.

See also  On stage in "The Inspector" at the Theatre, Gradoli and Farnese

A spokesman for Senator Chuck Schumer, the minority leader and a New York Democrat, said that the Senator is fighting for robust funding for the transit authority in the current round of negotiations. In March, Democratic leaders successfully secured $3.9 billion for the M.T.A. in the first federal stimulus package.

Without funding, though, transit advocates warned that riders would feel the effects of the proposed cuts for decades.

“Something like this, it would fundamentally change New York,” said Nick Sifuentes, the executive director of Tri-State Transportation Campaign, an advocacy group. “It would kick off the death spiral of people using anything other than public transit and then transit funding would never recover.”

The Transport Workers Union Local 100, which represents many M.T.A. workers, also decried the possibility of slashing the work force.

“Transit workers put this city and state on their backs and carried them through the deadly pandemic, risking their own health and lives,” the union’s president, Tony Utano, said in a statement. “Layoffs would be an unimaginable shameful betrayal.”

Making any of the drastic cuts would come at a high political cost to Gov. Andrew M. Cuomo, who controls the M.T.A. and has in recent years positioned himself as the only one capable of saving its subway system.

But framing possible cuts to service and fare increases as dependent on the federal authorities may lay the groundwork for blaming Washington if New York officials are forced to make unpopular decisions.

“Only the federal government can come to the rescue of the M.T.A. I think it’s important we recognize that,” said Mr. Foye, the authority chairman.

At a news conference on Wednesday, Mr. Cuomo said that the state’s own financial crisis hampers its ability to assist the M.T.A. if federal aid is not granted to the transit system and the state at large.

“It would be a financial catastrophe for the State of New York. There wouldn’t be one hole in the dike, called the M.T.A., there would be 50 holes in the dike,” he said.

See also  A 72-hour odyssey for 39 young students traveling to Scotland: stuck in transit in Frankfurt

Earlier this month, the agency borrowed $451 million from the Federal Reserve, becoming only the second state government borrower to use the program. The M.T.A. has also made some initial cuts to nonessential services, including reducing overtime and eliminating consulting contracts, that will save the agency $540 million next year.

Still, in recent weeks the M.T.A. has come under fire for not doing more to shore up its finances.

Financial experts and some state lawmakers have said that delaying cost-saving measures deepens the agency’s budget hole, which worsens by $200 million every week, and deferring conversations with legislators about possible new revenue streams delays earnings from them.

This, they say, risks plunging the system into an even more dire crisis in the years to come.

“The governor and the M.T.A. seemingly think they can keep the M.T.A. on ice permanently and that it will then just wake up one day,” said Assemblyman Robert Carroll, a Democrat whose district covers part of Brooklyn.

Adding to the urgency, many observers say it is unlikely that the authority will receive as much as $12 billion from federal authorities in the next stimulus package. The M.T.A. had originally asked the authorities for $3.9 billion in April to cover its operating losses through the end of this year, but now says it needs $12 billion to cover its deficit through the end of next year.

For comparison, the American Public Transportation Association, a lobbying group, has called for a total of $32 billion in the next stimulus package for the country’s transit agencies.

Already, other transit agencies around the country have begun slashing service and furloughing their work forces. But in New York, officials have hesitated taking any cost-saving steps that would immediately affect riders.

Historically, the agency has dug its way out of crises by cutting service, slashing fares, acquiring new state subsidies and taking on more debt.

But in this crisis, slashing service would lead to more packed trains, which would risk contributing to the virus’s spread and also discourage riders from returning to the system. Raising fares when ridership hovers at around 25 percent of usual would yield little new revenue and burden the lower-income New Yorkers and essential workers who make up many of the current commuters.

Meanwhile, the state and city are facing their own fiscal emergencies, and debt repayment already consumes nearly a quarter of the agency’s operating budget.

“The M.T.A. needs this huge helping of federal emergency aid to get through the now,” said John Kaehny, executive director of Reinvent Albany, a watchdog group. “But the future looks grim even with the federal aid. That’s the problem.”

“It’s a transit agency that has lurched from crisis to crisis,” he added. “Now it’s paying for decades of not restructuring where the M.T.A. gets its operating revenue.”