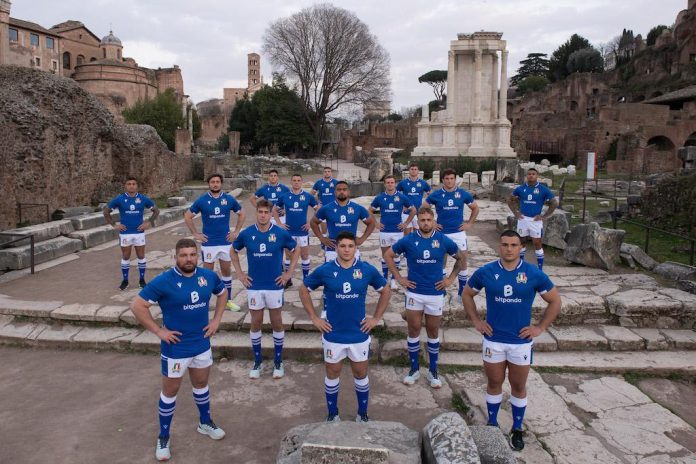 A weekend with strong rugby colors that the city of Rome started experiencing today and will go on till the Italy vs Scotland kick-off at the Olympic Stadium in Rome on Saturday 12 March. The capital’s symbolic facility hosted Captain Run by Lamarro and his teammates, the usual finishing training scheduled on the eve of the match today. Alessandro Onorato – Councilor for Sport and Tourism of the Roma Capital – and Valentina Corrado, Councilor for Tourism of the Lazio Region, blue shirts, are present to strengthen the strong link between the tournament and local authorities, partners of Italian rugby. Federation.

In the afternoon, the entire group, staff and players of the national team walked into the Imperial Forum where they photographed a team at the Tempio del Divo Giulio, one of the most prestigious and representative places in Roman history – as it did before. Was. Inside the world’s largest amphitheater before the 2018 Six Nations four years ago – a confirmation of the strong link between Italargby and the Capitoline region.

To enrich the oval weekend in Rome, events involving rugby fans in the capital will continue in Piazza San Silvestro, with a flash mob of bagpipes recounting the match that will be held the next day between Azzurri and Scotland . As in the previous match against England on 13 February, the center of the Tiber River inside the city will be crossed by a special boat carrying a maxi ball in association with Birra Peroni, historic FIR partner, Captain Run of Italian Fans’ Home . And colorful Scottish supporters.

On match day, Saturday 12 March, there will be several activities that will unite rugby and the city of Rome in different areas of the city adjacent to the match: Piazza Santissimi Apostoli (10.30 pm), Trevi Fountain (10.50), Piazza San Silvestro (11.10), Piazza di Spagna (11.30) There will be places where you can slowly begin to breathe in the atmosphere of the match, with the culmination of activities scheduled at 12 o’clock, about three hours before the Italy-Scotland kick-off. Scheduled at 15.15 at the Olympic Stadium. Students from the Rossellini Film Institute will document everything, while the collaboration between FIR Events and Communication and La Sapienza University continues with the active participation of the Department of Communication Sciences.

“For our city, it is always a source of pride to host the most prestigious rugby tournament. An event that sees the meeting at the Olympic Stadium as the main attraction, but which these days with many flash mobs on the streets of Rome We want to bring the spirit of this competition directly into the heart of the city so that the link between the capital and the tournament is always close. Once again Rome has proved to be a hospitable city and a privileged venue for major events. At such a difficult time, it is from the capital and from the entire rugby world that we want to launch our message of peace and friendship between the peoples ”Alessandro Onorato, Councilor for Sport, Major Events, Tourism and Rome Capital of fashion.

“The Six Nations gives a breath of fresh air to our region and Lazio businesses in the tourism sector. Already during the last match we have welcomed at least 12,000 foreign tourists who joined the thousands of Italian spectators present at the Olimpico in Rome. It had not happened since 2020 to record such a turnout. About 8 thousand Scottish tourists are expected for the next match and 35 thousand spectators are expected at the Olympico. The Six Nations us darkness marked by the pandemic Project beyond the moment, show how great events have a profound and significant impact on tourism and are a great opportunity for promotion, a way to enhance the quality of our tourist offer. This is true for Rome and the whole of Lazio. For this we thank the FIR with which we are engaged in a deep synergy” declared Valentina Corrado, Councilor for Tourism, Local Authority, Urban Security, Local Police and Administrative Simplification. Lazio region.