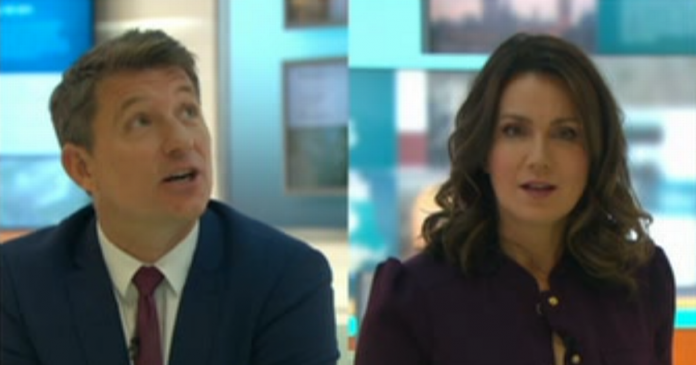 Andy Peters was presenting his usual competition segment and could be heard talking to the producer before it started.

After telling the audience in great detail about all the competition, he then explained: “You’re probably wondering, why is he talking so much?

“I talk a lot today because back in the studio, apparently they didn’t get any lights!

“So I can come here for hours chatting.”

Then the The Marrow cut back into the studio, where a faint Ben and Suzanne were sitting in the dark, holding their phones for some extra light.

Andy asked: “Ben and Suzanne, are you okay? My iPhone has got a torch, if it’s any help.”

Suzanne replied: “We’re trying, it doesn’t seem to be enough, and we’re not sure what really happened.”

Ben joked: “Alexa- turn on the light again! No, it didn’t work.

“It’s this unusual, because if you look in the studio you can see how many lights we have, and not one of them is on.”

“The house lights are on,” Suzanne said. “Like you’re in the canteen, so we have more uninterrupted light than that.

The sound then played in the studio as the cast and crew rushed to the scene at the time of the tragedy.

“Someone forgot to pay the bill?” Asked Ben.

The hosts then cheered as the lights returned, Susanna said: “Someone turned it off and turned it back on.”

“And he said let there be light!” Ben added.

Weather presenter Laura Tobin was delighted that her spotlight returned a few seconds after the start of her segment.

Ben had previously caused technical chaos on the show when he said: “Alexa, do a wet slap!”

Viewers turned off devices across the country to say their children were happy as he responded to Alexa’s request.

See also  Jack Wood of Eastenders has confirmed that he was leaving in February - but 'in a cab, not in a coffin'