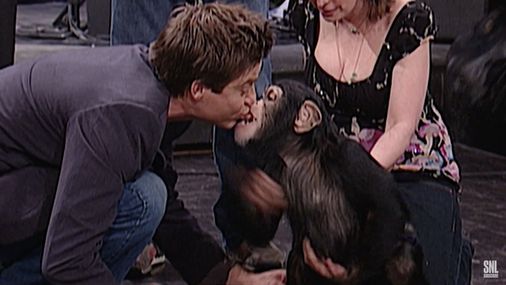 When he appeared on the show more than a decade ago, Batman said he took part in a sketch called “Poop at Celebrities Throwing Monkeys,” which naturally had “a monkey in it.”

“Now if the show had sketched it, they would have used the baby in a puppet or a faded suit, for safety,” Bateman said. “But at the time, they were using real adult chimpanzees. This was 2005. Things were loose. “

At the end of the show – when the cast members and crew embrace and say goodbye – that’s when things take a turn, Bateman said.

“The monkey tried to kill me,” Bateman said.

He continued: “Truly, I jumped at the chance to call the monkey a good job. You know, great. I’m a nice spread. But not chimpanzee. Chimp grinds his jaw, he grits his teeth, and he tries to cut my whole nose. “

Obviously, this kind of behavior is the “thing with chimps,” Bateman said.

“I think they hate to have men’s faces, and they want to get rid of them,” Bateman said. “Maybe he got a good look at this nose and thought I wasn’t losing half of it.”

The clip of the event was then played – and played again at a slower pace. Rachel Drach, a native of Lexington, who was also close to the chimpanzee at the time, was shown holding her hand covering her mouth, and looking horrified at the ordeal.

Batman said the experience was “terrible.”

Still playing with video from the 2005 show, the cast can be seen joking and smiling around – and Batman is constantly making statements.

“I’m laughing,” Bateman said. “But inside I think a monkey just attacked me and didn’t notice anyone. They just keep hugging. ”

Batman said he later corrected with the chimpanzee, who “felt very ashamed of himself” in his dressing room.

Check out his monologue and some other sketches from last night: