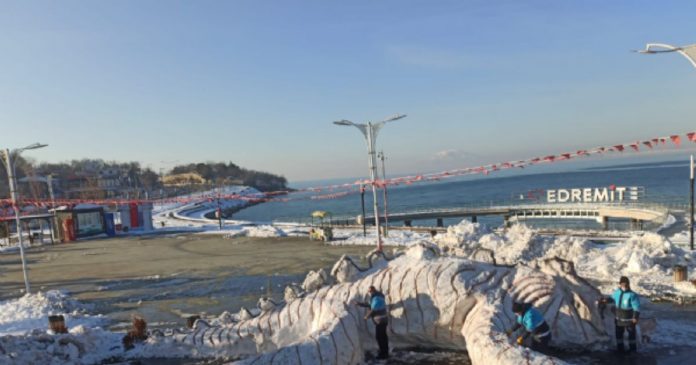 Legends about a sea monster in Lake Van date back centuries later. Repeatedly there are reports of “being seen” of a Turkish “nessie”, who is said to have done mischief in a lake van. But no one has yet to bring any real evidence – even though the former mayor of Vann has placed a “reward” on the animal’s images. But it is now evidenced, as “Van-Nessie” dares to go to the shelter – but only by ice and with the help of Adremy ​​city staff, who have built a monument made of ice to the legendary sea monster.

Lake Van has legends of sea monsters for centuries. In the early 7th century, Armenian revolutionaries described demons called “Visaps” in water. An article in the 1889 Ottoman newspaper “Saadet” describes how a man was dragged into the water by an unknown animal.

Is “nessie” just a big eel?

There was an actual “sea monster boom” in the Lake Van in the 1990s when several scenes were seen. It also caught the attention of media and tourists. So there were rumors that sea monsters from the Lake Van could be a hoax to encourage tourism – similar to the “Nesi” in Scotland.

In 1997, a man named Ko Naal Kojak presented a video that allegedly showed blurred footage of the “monster” – but the video was classified as suspicious by experts. Archaeologist and TV presenter Josh Gates looked for a sea monster in an episode of his cryptozoology show “Destination Truth” – but, as expected, he was not found. Some biologists suspect that the lake may contain large eels that people may mistake for the lake’s monster from the lake van.

See also  Batgirl: This Is What Leslie Grace Looks Like in Her New Role as Comic Book Heroine