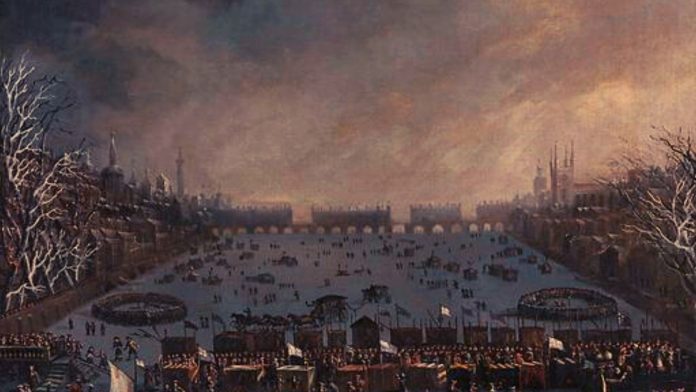 Frost fairs on the River Thames have been held since at least the 7th century. They continued fairly regularly until the 1700s. The Little Ice Age period was a time when the river froze most often and was when parties and fairs were held on the ice. The British winter during that time was harsher than it is now, and the river was wide and slow, further interrupted by the 16 piers and pylons of the medieval Old London Bridge, which were removed in the early 1800s.

There were 24 winters when the Thames froze enough to hold fairs on ice. , The Thames often freezes upstream beyond the tidal range, especially the upstream weir, of which Teddington Lock is the lowest. The last major cold of the Upper Thames occurred in the early 1960s.

Before the technological advances of the 19th century, bridges obstructed the natural flow of rivers, causing water to freeze so often that it often froze during the winter. Longer freezing was required on the Thames because the icing process was time consuming; Patches of ice are formed near banks and bridges, which gradually spread and merge until a continuous sheet of ice covers the river. Back then there were things called fairs, but in reality they were just unplanned celebrations, as a real fair required a Royal Charter. In the years 1084–1479, it is documented that sports such as archery and dancing took place on the River Thames.

The years 1683–1455 were very cold with snow between early December and 4 February. A whole bull was grilled on ice and a road full of stalls stretched from the temple to Southwark. Charles II, accompanied by his family members and his family, went to the frozen river to see the sights and participate in activities.

See also  The rise of the star, who is at risk - Libero Cotidiano

Even larger snowfalls occurred in 1684–16 and 1684–37, and later that century the part of the river was a continuous winter fair.

The biggest Pala fair of the century was held during the winter of 1813-11. Thousands paid entry fees to pass through channels in the snow along rivers. Soon after the old London Bridge was demolished, marking the end of an era.