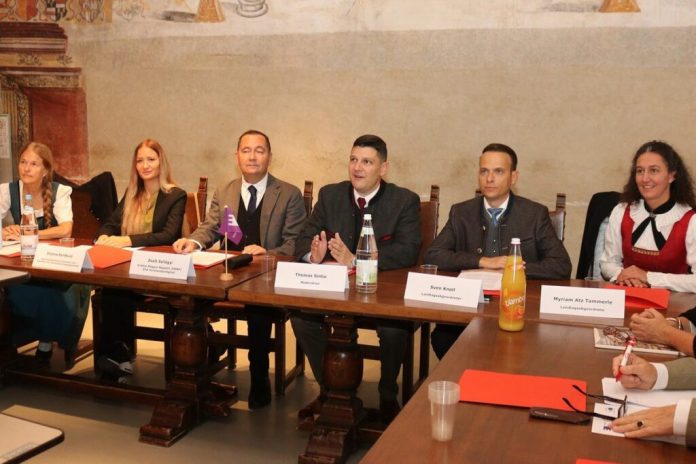 This is the proposal of the Süd-Tiroler Freiheit, detailed at the end of an international workshop on the topic of cross-border voting for indigenous ethnic minorities, which was held in Schloss Mareutsch on Saturday morning.

Possibility of exercising the European right to vote across the border, to guarantee the representation of indigenous ethnic minorities within EU institutions: The topic was debated on Saturday morning in Schloss Mareutsch at an international workshop organized by Süd-Tiroler Freiheit in collaboration with the EFA-European Free Alliance, the organization of which the South Tyrolean movement has been an active part for many years.

In addition to party leaders and some guests from the province of Trento, several international experts attended the workshop: live connections were in Scottish Paul Butcher, Political Advisor to the EFA; And Ruth Canducci, of Schleswigs Partei and representatives of the German-speaking minority in the Danish Schleswig-Holstein; On the other hand, there were speakers at the speakers’ table. Erdeli Magyar Nepari’s Zsolt SzlyagiYou are EFA counselor, representative of the Hungarian community in Romania; And Dejana Surcevic, Liga Socijaldemokrat Vojvodyne Which presented the current situation for Serbo-Croatians, Serbo-Magyars, Serbo-Romanians and Serbo-Slovaks in the Serbian Autonomous Region.

With the restraint of journalist Thomas Sinha, the speakers laughedo Presented and compared various existing models of international voting For local and national elections, voters based mainly on citizenship – simple or dual – and the prospects and proposals for the European vote were compared.

A proposal already exists for legislation at the European level: provide for the possibility of Cross-border list for minorities. However, this system will not guarantee representation to the less numerous communities; Another solution might be to vote not only on the basis of the first, but alternatively, on the basis of the second citizenship: A Romanian-Hungarian citizen may thus be able to choose whether to cast his or her European vote as a voter of one or the other citizenship; One system, however, would exclude stateless minorities such as Catalans, for example.

Südtiroler Freiheit was proposed by provincial and regional councilor Sven Knoll: noting that throughout Europe The boundaries of nation states coincide only minimally with the actual nationality of the population, Soluzoin Might Have A Chance To Present cross border regional lists Crossing the border is interesting for minorities – for example the Tyrolean one – and for stateless people – Catalan – and for Euroregions who already cooperate from a cultural, political and socio-economic point of view. A Uregian – such as the Tyrolean Euragio – may have a substantial legal basis for this.

These three models – Knoll added – are not in competition with each other, but may complement each other. There European region of Tyrol cross-border could play the role of pioneer and precursor to the European electoral system because on the one hand
It fulfills all the pre-requisites for grant of dual citizenship and on the other hand already exists legally and institutionally.

At the end of the workshop, a proposal was drafted for submission to the EFA, which was unanimously approved by the party assembly in the afternoon.

,The Assembly of the Süd-Tiroler Freiheit. supports and pursues the goal of a Europe of peoples and regions and calls on the EFA to promote protection of indigenous ethnic minorities Based on the following basic and propositional statements:

1. Predicting the receipt of Constituencies ECross-border regional readership based on ethnicity, language, culture and history. The European region of Tyrol – within the already existing “European Cooperation Group” (EGTC) could play a leading role in this sense.

2. Support the possibility request and receive
Dual and multiple citizenships for members of indigenous ethnic minorityso that they can Exercise your political participation beyond national boundaries.