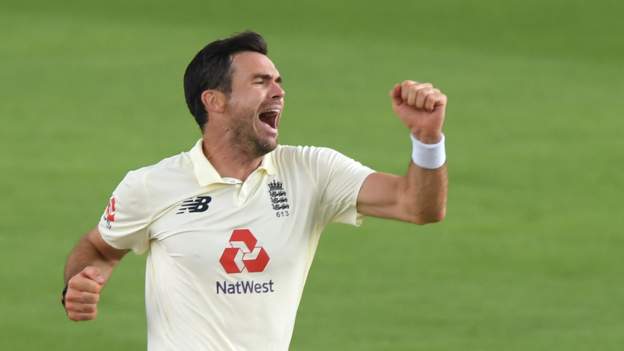 England’s bowlers grabbed the upper hand in the second Test against Pakistan on a rain-affected first day at the Ageas Bowl.

James Anderson claimed two wickets and Stuart Broad, Chris Woakes and Sam Curran one each as Pakistan closed on 126-5 with only 45.4 overs possible.

Abid Ali was dropped twice on the way to 60, with Pakistan looking well placed on 78-1.

But after a lengthy rain break, the hosts capitalised on humid conditions suited to seam bowling by taking 3-18 during an hour-long session.

Rain forced the players off again at 17:00 BST and bad light prevented them from returning.

More stormy weather is forecast for the remainder of the match but if conditions stay the same both sides will be confident of winning.

Pakistan have a bowling attack that could easily utilise conditions as England have done, while they will look to star batsman Babar Azam to extend their score on day two. He ended unbeaten on 25.

After last week’s superb victory at Emirates Old Trafford, victory in Southampton would give England a first series win over Pakistan in 10 years.

In the end, England will be pleased with their day. They will now look to control the game from the front rather than pull off an unlikely comeback as they did in Manchester.

Pakistan opted to bat at the toss but the steamy conditions helped England find movement in the air and off the pitch.

Anderson and Broad bowled a fine opening spell, one that should have seen greater reward than just the wicket of Shan Masood for Anderson in the third over.

Both beat the bat regularly and Dom Sibley dropped a comfortable catch off Broad at third slip when Abid was on one.

Second slip Rory Burns spilled an even easier chance soon after and those missed chances could easily have frustrated the bowlers.

Instead, they came out after the interruption and were rewarded for their good bowling with the fielders making amends.

Anderson gives reminder of his powers

After a difficult match at Old Trafford – he returned match figures of 1-97 – it took Anderson only eight balls to double his wicket tally for the series.

The 38-year-old trapped Masood, Pakistan’s centurion in the first Test, lbw with an inswinger in his second over.

Anderson bristled with frustration this week at speculation he could retire after some observers suggested the powers of England’s record wicket-taker were beginning to fade.

The early signs in Southampton are that he is finding his groove.

He found more swing than on many occasions this summer, perhaps helped by the conditions, and his pace was consistently around 85mph.

When Pakistan were batting into a promising position, with captain Azhar Ali sharing 72 with Abid, it was Anderson who produced a probing delivery that Azhar nicked to third slip.

Anderson’s two wickets take him within eight of becoming the first fast bowler to take 600 in Tests.

Pakistan struggle but all not lost

Pakistan will be disappointed to stumble from the position Abid and Azhar gained.

Abid’s innings was streaky, the majority of his runs scored to third man or fine leg. Azhar, too, was not at his best but he showed promising signs in his 85-ball 20.

Fawad Alam, recalled after an 11-year absence in place of all-rounder Shadab Khan, lasted just four balls before he was trapped lbw by Woakes for a duck.

The tourists would have been grateful play did not restart late in the day when they could easily have lost further wickets in the gloom.

They still have Babar at the crease and will know their quick bowlers have the ability to cause England’s batting order problems – a batting order that is without Ben Stokes.

England bowler Sam Curran on BBC Test Match Special: “It was a big responsibility on us to put pressure on them but we bowled really well and 120-5 was great for us.

“The main thing when we do start is to make sure we’re on the money first up. Babar is probably their big player so we will try to get him make advantage of that first hour and then get some big runs.”

Former England batsman and batting coach Mark Ramprakash on TMS: “If this pitch does dry out and become fairly batsman-friendly England are going to lack that 90mph edge. Much has been made that Jofra Archer and Mark Wood are fit and ready to go.”

See also  United Kingdom: Last day of voting to decide new premier and leader of the Conservatives, Truss the Favourite