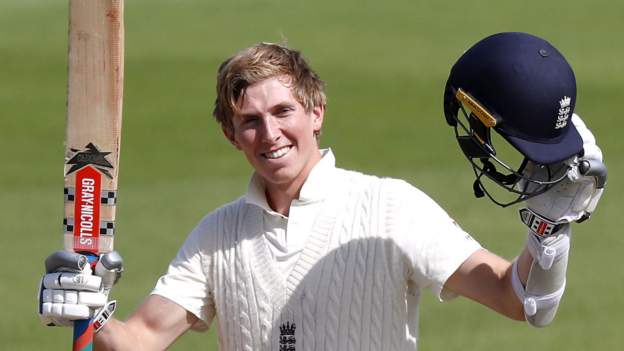 Zak Crawley’s superlative 267 and 152 from Jos Buttler led an England run-fest on the second day of the final Test against Pakistan at the Ageas Bowl.

Crawley, 22, became the third-youngest England player to make a double century and posted their 10th highest score in history.

Buttler overturned being given out on 99 to complete his second Test ton and their fifth-wicket stand of 359 is England’s best of all time as well as their joint-sixth best for any wicket.

Chris Woakes, Dom Bess and Stuart Broad had some fun to lift England to 583-8 declared, their highest total in four years.

They gave Pakistan just under an hour to bat, in which time James Anderson bowled beautifully to remove Shan Masood, Abid Ali and Babar Azam.

Pakistan closed on 24-3, while Anderson is only four short of becoming the first pace bowler to reach 600 Test wickets.

Even if Pakistan can rouse themselves to save this match, England – already leading 1-0 – are set to win the series.

If the work Crawley and Buttler did on day one, when they took England to 332-4, flattened Pakistan, their relentless march on day two demoralised the tourists.

After a stop-start morning which was twice interrupted by rain, Crawley in particular was so free-flowing there were times when it felt like he was toying with the bowling.

Not that the tourists bowled badly. There was a period in the morning session when they challenged the England pair and wicketkeeper Mohammad Rizwan was excellent with the gloves throughout.

But by late afternoon, with the sun shining and wind gusting, Pakistan were out of ideas, waiting and hoping for the declaration.

When it came, their top order was tortured in the fading light by England’s new-ball pair Anderson and Broad, who were followed by Jofra Archer bowling 90mph rockets.

Left-hander Masood overturned being given lbw to Broad before he yet again fell to Anderson, lbw to an inswinger, Abid edged an outswinger to Dom Sibley at third slip and Babar Azam was leg before to the last ball of the day.

What was so impressive about the 171 Crawley racked up on Friday was the ease and elegance with which he amassed his runs.

After starting patiently on Saturday – he took 25 deliveries to add to his account – Crawley again played all around the wicket with impunity.

Not since Kevin Pietersen’s prime has an England batsman dominated an attack and scored with such freedom.

Two strokes – an inside-out drive over extra cover for six off the leg-spin of Yasir Shah and a reverse-sweep from outside leg stump to the cover boundary off the off-spin of Asad Shafiq – were particularly audacious.

At 22 years and 201 days, Crawley is behind only Len Hutton and David Gower in the list of England’s youngest double-centurions.

He was primed to make England’s first triple century since Graham Gooch 30 years ago when he ran past a Shafiq delivery and was stumped down the leg side, leaving to congratulations from the entire Pakistan team.

Midway through the first Test of this series, Buttler was under pressure, not scoring enough runs to compensate for his mistakes behind the stumps.

Then came a match-winning innings at Emirates Old Trafford, followed by this; complete vindication of England’s faith, his highest first-class score and one that has made him the leading Test run-scorer of the summer.

After he resumed on 87, there was the heart-stopping moment when he was one run short of a century. Given out caught behind off Mohammad Abbas, the immediate review showed the bat had brushed the pad.

From the next ball he completed his second hundred two years after his first, but it was not the signal for Buttler to slip into limited-overs destruction.

Instead he remained patient throughout, leaving the ball with care. He added only 27 runs between lunch and tea and at one stage went almost 38 overs without finding the boundary.

His determined accumulation was ended with a tame pat back to bowler Fawad Alam, signalling England’s acceleration towards the declaration.

‘England’s best two days for a long, long time’ – what they said

“The past five or six years, England haven’t had that mentality of grinding them into the dirt. This is the first time I have seen it, and that is a great sign.”

England batsman Zak Crawley: “Scoring a double hundred for England was beyond my dreams. It’s a very good day.”

England wicketkeeper Jos Buttler: “It was a pleasure to be part of. Zak played an incredibly special knock. We talk as a side about big first-innings runs. To do that and then the wickets tonight, it’s been a really great day for us.

“I was very happy to play second fiddle to Zak who was scoring all around the wicket. He made the margin for error very small. It was great to watch. Not many guys hit the ball as cleanly as he does.”

See also  Ukraine existed before Lenin, but USSR has nothing to do with it: Putin hints at something else