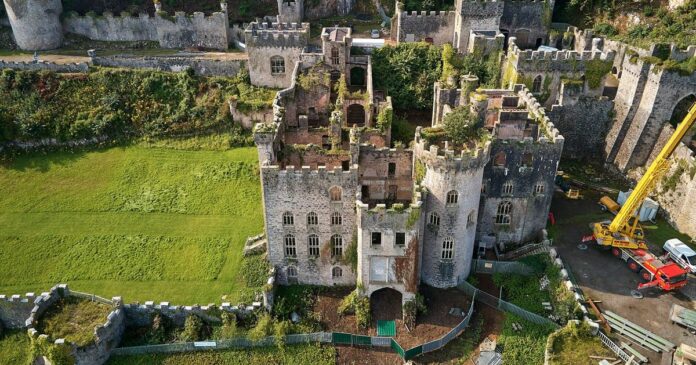 The location for I’m A Celebrity…Get Me Out of Here! 2020 has officially been revealed.

Speculation has been rife that the famous reality series was relocating from the Australian jungle to Gwrych Castle, Abergele in North Wales.

And now, ITV bosses have confirmed that the historic Welsh location will house the upcoming show.

The much-loved series – fronted by Ant McPartlin and Declan Donnelly – will see a celeb, for the first time ever, crowned King or Queen of the Castle – as producers ditch the usual leafy jungle in favour of the UK base amid the coronavirus pandemic.

Similarly to the usual series, the show is set to entertain viewers as stars take part in grueling trials and fun-filled challenges to win food and treats in order to survive.

Snaps released from inside the epic venue – that is spread across 250 acres of gardens and grounds – reveal that the sprawling property will have to be revamped in order for the stars to be able to live in the listed building for weeks on end.

A number of alcoves and hidden areas are dotted about the remarkable 19th century building and the celebs could be exposed to the chilly elements as parts of the stone property have turrets instead of roofing.

The cost of hiring the castle for six weeks is thought to be more than £1million.

Richard Cowles, Director of Entertainment at ITV Studios said of the castle: “The Australian jungle is such an integral part of the show it was a big challenge to find a UK location where we could continue to deliver what viewers love about I’m A Celebrity…Get Me Out of Here!

“But Gwrych will definitely do that; the castle sits in an amazing and atmospheric setting on a hillside overlooking the Irish Sea.

“While there will be plenty of changes required as we move from New South Wales in Australia to North Wales in the UK, we are really excited to see how we can adapt the format and make the castle our new home for a very special 20th series of I’m a Celebrity…Get Me Out of Here! this autumn.”

Gwrych Castle has a dark history as it has been used for Satanic rituals and is said to be haunted.

The castle – which was a popular visitor attraction in the 60s and 70s – is said to be haunted by the Countess of Dun­­donald.

The epic stone building closed in 1987 and the American owner failed to carry out promised renovations.

It fell into disrepair and was looted, with items stolen including a marble staircase, Cuban mahogany doors and stained-glass windows.

Now the location is set to be boosted with a cash injection from ITV.

Dr Mark Baker, chair of the Gwrych Castle Preservation Trust said of the castle being used for IAC: “I’m absolutely delighted that I’m A Celebrity has chosen Gwrych Castle to be its UK location for the 2020 series.

“Gwrych Castle is a beautiful grade I listed 19th county house and a must-see destination for tourists visiting Wales.

“I’m A Celebrity being here will really help support Gwrych Castle and its ongoing restoration as well as giving the region a much-needed economic boost.”