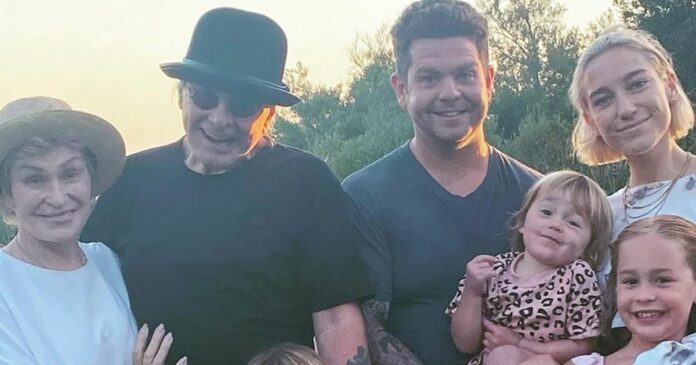 Jack Osbourne has delighted fans by sharing a rare family photo as three generations of Osbournes head off on holiday together.

The son of Black Sabbath rocker Ozzy, 71, also assured fans about his dad’s health after he recently underwent major spine surgery and was diagnosed with Parkinson’s last year.

For his latest Instagram post, Jack, 34, posed up with his famous parents Ozzy and Sharon – who haven’t been seen for months – and his three kids Andy Rose, Minnie Theodora and Pearl, who he shares with ex wife Lisa Stelley.

Prince of Darkness Ozzy looked very at home in his role of doting grandpa as he beamed beside wife Sharon, who put a supportive hand to his chest.

Ozzy has Parkinson’s which is now affecting his ability to walk but, as he revealed in a recent interview with the Mirror, he won’t be retiring any time soon.

Jack told his 521,000 Instagram followers that his father is doing well after he was pictured looking almost unrecognisable sporting grey locks instead of his signature black tresses.

Dad Jack said Ozzy simply hadn’t got his hair dyed because ‘it’s not really recommended for people with Parkinson’s’ to get their hair dyed during global pandemic.

Speaking to the Mirror this weekend, Ozzy said he has been quarantining since March.

The rock icon also said he is determined to finish his last tour which was postponed during the coronavirus pandemic.

“When you feel that audience jumping, it’s a better feeling than orgasm. It is the best love affair of my life.

“The party is on, man. I feel honoured people still want to see me,” he said.

“To be Ozzy Osbourne it could be worse… I could be Sting,” Ozzy joked.

Opening up about his Parkinson’s diagnosis, which he went public about in January, Ozzy says: “Well the one questions from me was, ‘Is it a terminal illness?’, and the guy says, ‘No, but life is’.

“It’s just another thing on my plate I have got to deal with. I’m not in the slightest worried about it.”

Wife Sharon said they went public with the news in January this year as they didn’t see it as a ‘dirty little secret.’

The former X Factor judge said of her husband-of-38 years “He’s always had a funny walk so f*** it, you know? Let’s make nothing different. No pity, he doesn’t need pity. He just needs a stage.”