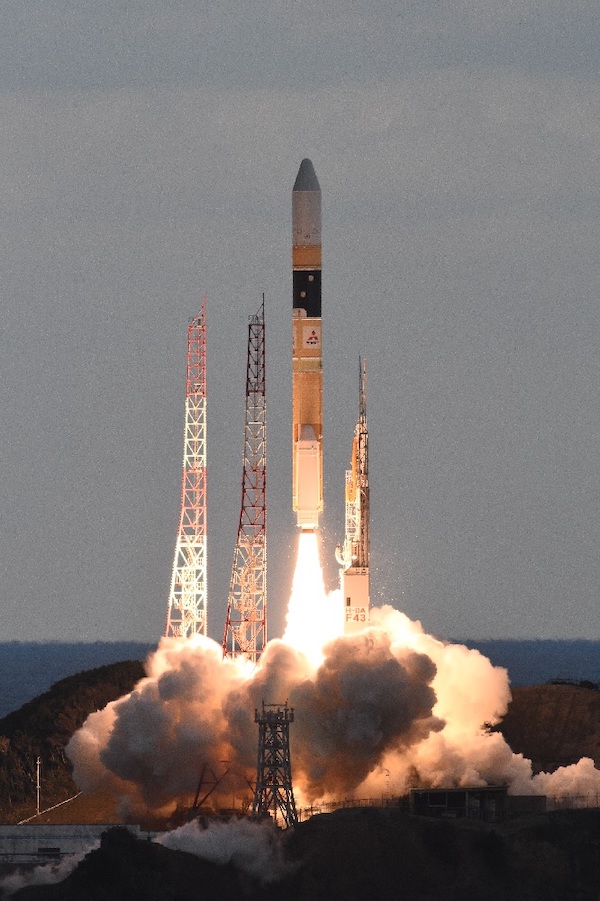 A Japanese satellite H-2, designed to relay data and images of civilian and military Earth observation spacecraft, was launched on Sunday by a rocket.

A live video feed of media viewers at Tanegashima shows a 174-foot-tall (53-meter) H-2A rocket in the broken clouds on the spaceport.

The Japan Aerospace Exploration Agency did not provide a live webcast of the launch on Sunday, due to a sensitive military connection with a possible data relay payload. Japanese officials also did not disclose the specific operating status of the new satellite in geostationary orbit, or specifics about its mass and size.

Powered by a hydrogen-fueled LE-7 main engine and two strap-on solid rocket boosters, the H-2A went into the stratosphere with 1.4 million pounds of thrust moving eastward from Tanegashi over the Pacific Ocean.

Less than two minutes after the lift off, the twin strap-on booster burned out and the H-2 strapped off the launcher.

The H-2A’s main engine shut down and separated about six and a half minutes into the first phase of the mission, leaving the cryogenic upper phase to fire the data relay satellite into its intended egg-shaped transit orbit.

The rocket’s upper stage successfully launched the data relay satellite into orbit, according to Mitsubishi Heavy Industries, the builder and launch operator of the H-2A rocket.

Sunday’s launch was the 43rd flight of an H-2A rocket since 2001, and Japan’s fourth space launch of the year.

The H-2A rocket was expected to launch its payload – part of the Japan Data Relay System, or JDRS – into an elliptical geostationary orbit. The satellite will use its own propulsion system to reach a circular orbit of more than 22,000 miles (about 36,000 kilometers) above the equator, where it will enter service and embark on a 10-year mission.

At that itude altitude, the satellite will orbit at the same rate of Earth’s rotation, giving it a constant view over the Asia-Pacific region.

The new satellite has a laser utilizing communication system or LUKAS developed by the Japan Aerospace Exploration Agency. From its perch in geostationary orbit, the ical optical communication payload will connect to satellites flying several hundred miles above the earth with an infrared laser beam nearby, allowing data transmission at higher rates.

A data relay satellite, the user can communicate with the spacecraft for about 40 minutes at each interval, relaying images, scientific data and other information between the Earth observation satellite and the ground station. The connection allows image analysts to retrieve data more quickly if they wait for the observation satellite to pass through the antenna on the ground.

The new optical data relay replaces the JXA’s Kodama spacecraft, which had S-band and Ka-band inter-satellite links, providing a communication speed of about 240 megabytes per second. JX dismantled the Kodama Satellite in 2017 after a 15-year mission.

The laser-equipped relay will allow the speed of satellite data transmission to be 1.8 gigabytes per second, seven times faster than the possible speed from the coda. The antenna for Kodama’s radio frequency transmission is 11.8 feet or 3.6 meters in diameter, while the laser terminal for optical relay satellites is 5.5 inches or 14 centimeters in diameter.

Using it like a foot, Lucas was developed for high reliability, miniature and significant improvement in communication capabilities for practical use, JXA said.