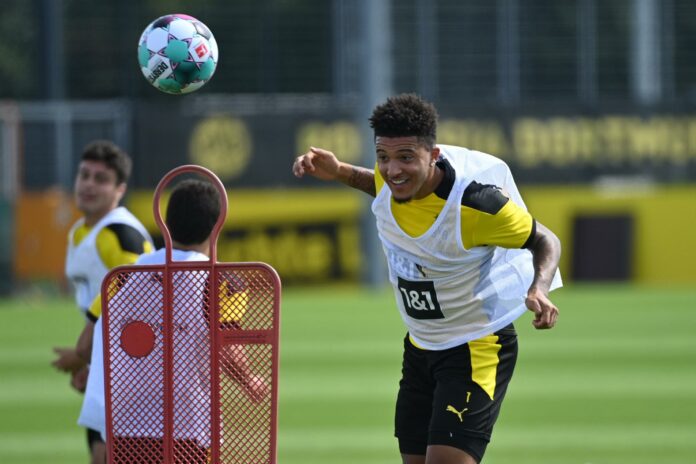 Jadon Sancho insists he is “really happy” playing for Borussia Dortmund after they strolled to a 6-0 friendly win over SCR Altach.

The 20-year-old has been heavily linked with a move to Manchester United this summer, who missed Dortmund’s August 10 deadline to sign the England international.

Dortmund sporting director Michael Zorc subsequently insisted Sancho will not be leaving the club, stating they are planning ahead with the youngster in the squad.

Sancho has now travelled to Switzerland with his team-mates, where Dortmund kicked-off their pre-season training camp with a routine win, of which the youngster started and played the first 45 minutes.

“I love playing with this lot. It is a special bunch,” Sancho said after the game. “We’ve got some special young players coming up.

“I am really happy to share the pitch with them and guide them. I was once in their shoes, playing with the seniors. I am happy for them.”

“I joined when I was 17. Some of the lads are the same age. I’ve been there and done that. I can guide them in what’s good and what isn’t. I can hopefully motivate them as well.”

United will continue to hold talks with Sancho’s agent Emeka Obasi, while Dormund have also introduced Marco Lichtsteiner as an intermediary.

Meanwhile, starting alongside Sancho was 17-year-old Jude Bellingham, who was also a prime United target before completing his move to Dortmund.

The former Birmingham also played just the first half – and he certainly made his time on the pitch count.