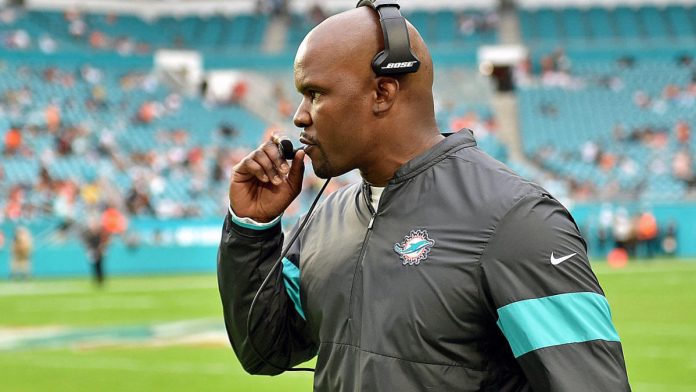 The Miami Dolphins and the Cincinnati Bengals have been embroiled in a battle that has nothing to do with their game on the football field. Penalties for special teams are awarded to the NFL. The year may have resulted in a fight, as three players came out in a brawl that led to the Dolphins head coach Brian Flores seeking action.

Bengals safety Shawn Williams and the Dolphins’ wide receivers Devente Parker and McHollins were ruled out for their role in the brawl, which began after the Bengal’s wide receiver Mike Thomas had a late success on Dolphins Punt Returner Jackim Grant. Muff’s punt by Grant was due to a kick catch interference penalty on Thomas – who was not sent off.

Grant, who was injured at the game, dropped both hands as she lay on the ground in search of the flag. Once the game was over, some pushers on both sides and players and punches engaged in shaking were thrown, shouting at the officials as he tried to enter into a brawl.

Flores realized he had to keep himself entertained in that moment, but he would never miss any opportunity to stick for his players. There’s a reason the Dolphins have been fighting for him since he arrived in Miami.

Tua Tagoviloa praised Flores for reacting on behalf of his players, who are very much moving towards chemistry in the locker room. After the game, many Dolphins players defended their head coaches, including Shaq L Law Sun and Christian Wilkins.

“I think it speaks a lot to the character of Flow – how much it means to him, you know, his player got hit, and it wasn’t the first time. This was the second time. It means a lot,” Tagoviloa said. “He’s not the only coach there. He doesn’t let his person go if he gets injured. He stands for us as a team.

“You see it, Jakim (Grant) and the other people trying to defend Watton’s defense are going there. But I think it’s a will – however, it happened the way it happened, it’s also about how close we are. Also the testament as a team. “