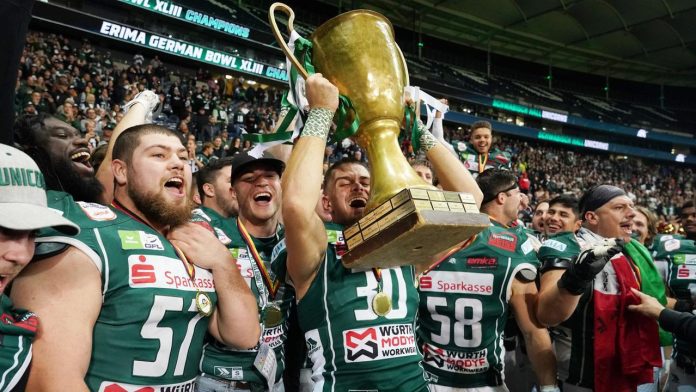 The Unicorns won the 43rd German Bowl Final against the Potsdam Royals in 44:27 (27:13). “It’s really great to be a champion now,” said Marlon Werthman, the Unicorns’ right guard. This is the first championship title for him. Last year he was in the final with the Unicorns, but lost to the Dresden Monarchs. “I’m overwhelmed, really can’t believe it all, so happy. But it’s also such a feeling of relief that the work has paid off.”

Destiny Idiahi, 20, a defensive tackle, started playing football only two years ago after playing football. “It’s indescribable, I would never have thought of it,” he said after winning the final. Wide receiver Pius Prosinecki said: “We lost two finals in a row. You felt in the team that everyone wanted. We deserve to be German champions.”

Open exchange of blows in the beginning

In a duel between two opponents who have gone twelve games unbeaten so far during the season, the Potsdam team, which has been represented in the GFL, the highest national league since 2018, started its German Bowl premiership in the opening quarter determined. Resolve and took a 13:7 lead. After that, however, the Unicorns, under the direction of quarterback Reilly Hennessey and with a strong running game, turned the match around and were up 30:13 at halftime before the end of the third quarter.

Fifth championship title for the Unicorns

That’s when the Royals were able to score again and fell short with 20:30 left. Haller responded quickly, pulling out to 37:20 and leading the final stretch relatively confidently with a time of 44:27. It was the fifth title for the Unicorns in ten finals appearances. Despite the loss, it was the best season in club history for the Royals.