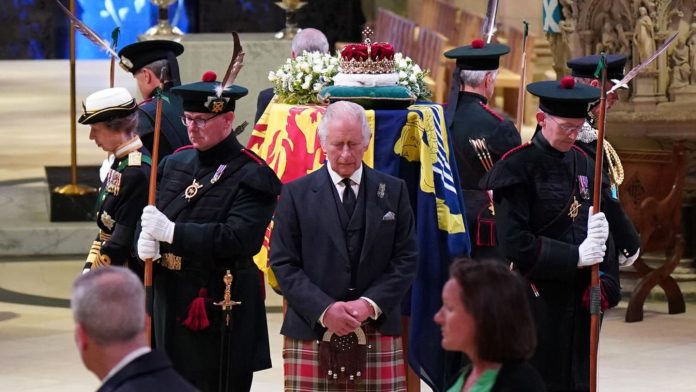 King Charles III and Camilla, the Queen Consort, arrive in Edinburgh after receiving condolences from MPs at Britain’s Parliament during a ceremony on Monday morning.

A funeral march will be taken out in memory of the Queen in Edinburgh. The Queen’s coffin was taken from Balmoral Castle to Edinburgh on Sunday. Several members of the royal family are expected to attend the funeral. The schedule looks like this:

First, the king attended the main ceremony at the Palace of Holyroodhouse in Edinburgh, where he was presented with the keys to the city. Later, he and other members of the royal family will accompany the Queen’s casket. The path leads from the Royal Mile to St Giles’ Cathedral. Behind the coffin are the Queen’s four children: King Charles III, Princess Anne, Prince Edward and, dressed in civilian clothes as he is no longer acting royal, Prince Andrew.

This will be followed by a service in honor of the Queen at St Giles Cathedral. The main focus here is the life of the Queen and her relationship with Scotland.

The Queen will be kept in St Giles’ Cathedral for 24 hours from 5pm so people can say goodbye to Elizabeth II. The waiting Scots are saddened by the loss, but say they are happy to have the opportunity to say goodbye to the Queen as she dies in Scotland. The King then proceeds to the full chamber of the Scottish Parliament. Here the proclamation of mourning is heard, to which the king joins. The king will also speak.

King Charles III in the evening. And other children of the Queen queue up for a wake around the coffin at St Giles’ Cathedral.