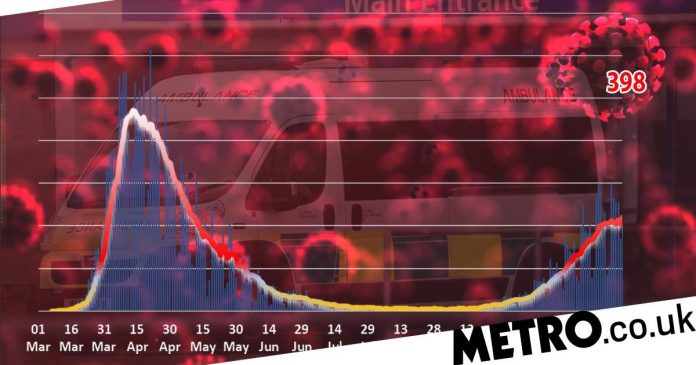 Another 398 coronavirus deaths have been reported in the UK – the highest on Sunday in seven months.

The death toll on Sunday, April 19, was 432. Since the last four Sundays, the total portion of each day has been above 150, compared to today’s total portion. The reason for the low number of deaths reported over the weekend is the gap in trend figures, while the government said the ‘processing error’ has also increased today’s total.

It comes England were told it would come out of the lockdown on 2 December as planned. More details will be revealed tomorrow, when the government will confirm a return to the local tire system with strict restrictions.

The government said today’s data included 141 deaths previously published in England that were excluded from yesterday’s data due to a ‘processing update’.

However, even without those deaths, today’s total would still be 257 – the highest toll since May 24, when 379 people died.

Different statistics indicate that there have been 63 deaths, 73 deaths, including the mention of Kovid-1 on the death certificate.

There have been 808 new cases of coronavirus in Wales, including a total of 723,3411 since the outbreak began.

Also for the health department, 11 new deaths were reported, meaning the toll rose to 2,376.

Back in England, it was publicly said that the lockdown could end in a fortnight, with The pub curfew is expected to be broken at 10 p.m.

But those in tough tires under the revised system have been warned that despite the promise of a vaccine rollout on the horizon, normal life will not return until at least Easter.

Meanwhile, the World Health Organization has warned Europe that it could face a third wave of infections if it fails to learn from past mistakes.

Contact our news team by emailing us at [email protected]