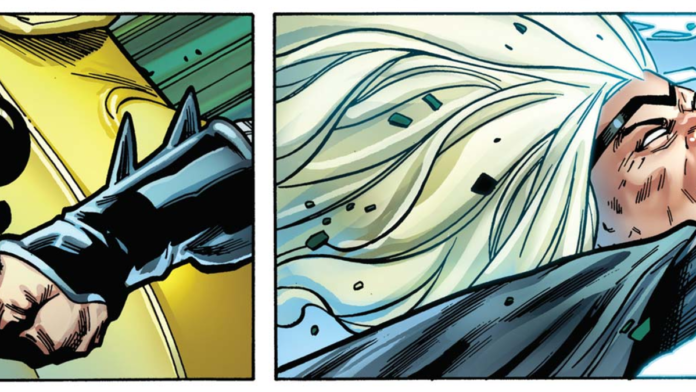 Trying to make sense of comics continuity at the best of times requires offering up a tiny little part of your brain to be smushed to gooey smithereens in the mortar and pestle of comic book publishing tomfoolery. But friends, I fear trying to make sense of Marvel’s newest tango with the world of Fortnite has done that to my whole-ass brain instead.

When Fortnite isn’t about weaponizing its massive, young fanbase in absurd corporatist legal battles, it is, occasionally, about being an equally absurd metaverse of pan-fictional tie ins. Aside from being the biggest video game on the planet, it’s played host to movies, live concerts, and more tie-in skins than you can shake Jason Momoa’s moistened torso at.

Case in point, its current “season” of content, Nexus War, is Marvel Comics-themed, bringing the likes of Storm, Thor, Wolverine, She-Hulk, and more into the game as purchasable skins.

This wouldn’t be too out of the ordinary for Fortnite most of the time—hell, it’s far from the first time it has collaborated with Marvel, considering Deadpool and the X-Force showed up a few months ago. But here’s the thing: Marvel just went and made the events leading up to this Fortnite collaboration…canonical to its ongoing comic book continuity.

“One of the most exciting things about the crossover is how naturally it keeps a foot both in Fortnite and the Marvel Universe,” Marvel Comics editor Mark Basso said in a statement on the season’s launch. “We had a lot of great creative discussions between Marvel and Epic Games about where our storylines could cross over naturally, and seeing how prime a target the Fortnite Island would be for Galactus, who Donny Cates had already been exploring in his Thor series, set the whole thing into motion.”

Yes, this does indeed pick up on a thread from Donny Cates, Nic Klein, Matthew Wilson, and Joe Sabino’s Thor ongoing. Recently, the returned God of Thunder has found himself to be the herald of Thunder, forging a dire pact to become Galactus’ steward—acting as his vanguard, scouting out delicious planets for the big ol’ cosmic buffet-lover to eat up. Thor only did so because a defeated Galactus came to him with an offer: help him consume five specific worlds, and the World-Eater would have the power to stop a sinister plague known as the Black Winter, the end of all things. Which is, you know, pretty bad.

Anyway, while on their interstellar all-you-can-eat trip in Thor #4—with Thor trying to evacuate the worlds Galactus seeks before he can eat them—the duo discovered a strange rift in spacetime that looked eerily like the same rift that shut Fortnite down (and sent the world insane for a few days) when it relaunched as “Chapter 2.” In the new free-to-read tie-in comic Thor: Nexus War—by Cates, Greg Land, Jay Leisten, Frank D’Armata, Richard Starkings, and Tyler Smith—we get to see the ramifications of that discovery play out, as Galactus, so utterly compelled by the rift’s potent, infinite energies, becomes enamored with voring Fortnite.

Naturally, Thor doesn’t want that to happen, so he flies in, and finds himself…well, in Fortnite. There are all your favorite characters skins like Peely the Banana, Jonesy, and, uh, *furious googling* Brite…Bomber? Anyway, Thor promptly gets shot at, because he’s in the middle of a game of Fortnite, and when he realizes he’s trapped in a realm that’s an island populated by 99 trigger-happy idiots, Thor manages to get a message to Lady Sif on Asgard, who sends in a whole plethora of Marvel’s mightiest heroes to try and help him.

Usually, we’d dismiss this as some kind of terrible brand nonsense that got us, say, DC’s HBO Max comics, or That Time Marvel Wanted to Stan Defense Contractors. But by bringing in current Thor writer Donny Cates for Nexus War, and interweaving it with the current narrative of the Thor series, Marvel has opened an ark of the covenant that has promptly melted my entire face and brain away. Why? Because if Fortnite is Marvel canon, then, well…everything that’s ever happened in Fortnite is Marvel canon. I’m canon. You’re canon. A legal dispute with one of the biggest tech companies in our world is canon.

Part of what makes Fortnite fascinating, even if you are a mere spectator to its phenom, is the idea of a metaverse where all kinds of pop culture can co-exist within its “last man standing” shoot ‘em up mayhem. It’s had big movie and TV show tie-ins, and DJs have staged live concerts connecting fans across the entire world. When things happen in Fortnite, the pop culture landscape as we know it shifts. And now those shifts, those splinters of our own world’s fictional ephemera, are, in a loose way, part of Marvel continuity.

Christopher Nolan is Marvel canon because he screened The Prestige, Inception, and Batman Begins in-game. If that didn’t also make Batman, and therefore DC Comics, Marvel canon (sorry, Amalgam), then the fact that during the same Fortnite season there were also tie-in skins for Jason Momoa’s Aquaman and Black Manta did. Which in and of itself brings with it the DC cinematic universe (née multiverse) into continuity. Is the Zack Snyder cut of Justice League now also Marvel canon? Oh god. Oh, and so is Marvel Studios, because of the tie-in event the game did for Avengers: Endgame in Fortnite that brought a whole Thanos-starring mode to it. Oh, and Avengers: Endgame itself, because of that scene where Korg is playing Fortnite. That’s at least slightly less weird because it’s uh, in the family, so to speak.

It means DJ Marshmello is as bonafide Marvel content as much as the X-Men. It means J.J. Abrams is Marvel canon (outside of that bad Spider-Man comic he wrote) because he showed up to host a clip from Star Wars: The Rise of Skywalker with his own, impossibly skinny Fortnite avatar. Oh, and yeah, Star Wars—both the movie franchise and the entire fictional universe, because said event actually included the message from the reborn Emperor Palaptine referred to in The Rise of Skywalker’s opening reel as “The Dead Speak!”

Oh god please help me, my brain, it’s rolling out of my skull.

As you can tell from the incoherent screed you’ve just read, I’ve thought about this much more than I should have. Perhaps more than anyone at Marvel Comics or Epic Games did. Which is for the best, because I’m now kind of intellectually woozy and would quite like to go lie down.

For what it’s worth, Thor: Nexus War also notes that attempting to contemplate the very existence of Fortnite’s metaverse is so cognitively taxing—like making sense of comics themselves!—that Thor and his newly arrived allies start losing all memory of why they’re there, and suddenly they’re just Fortnite people building makeshift towers, battle royale-ing, and, presumably, flossing. In 60 years time, Old Man Thor isn’t going to be like “Verily, Kamala Khan Jr., the Allfather doth remember that time whenceforth I smashéd Peely right in his fibrous banana face, ‘twas strange even for an Odinson.”

But just because Thor, Iron Man, Captain America, Groot, and multiple X-Men will not remember their insane forward somersault into a world somehow more peculiar than Earth-616 doesn’t mean my brain is not permanently ravaged with trying to comprehend it.

For more, make sure you’re following us on our Instagram @io9dotcom.