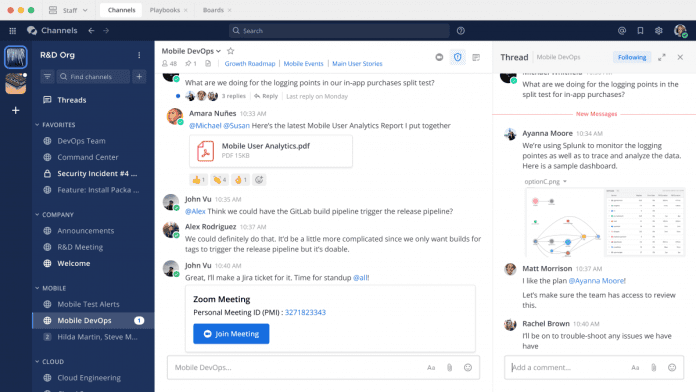 With the new version 7.0, Mattermost updates its chat and collaboration platform. The update focused specifically on features requested by users: among other things, the program features a new thread view for answers, which can be collapsed to provide an overview. Administrators can enable this feature by default for all users if they wish.

In addition, apps for iOS and Android can now be linked to multiple MatterMost instances. However, this is still a beta feature that users who want to test it out will have to explicitly activate it. Along with apps and desktop clients, voice calls can also be made across channels in the future, sharing screen content with other participants. Chat and other mattermost functions are available in parallel in the background. Officially, this feature is still in beta stage – cloud customers should get it automatically, admins of local instances will have to configure it manually.

In addition, developers are expanding Chat’s text input with new buttons for formatting messages. It is intended for users who do not or do not want to write Markdown – the program converts it to the correct syntax. A click on the preview finally shows the message as it will appear in the channel.

Further updates are available for the PlayBook, which is a checklist for automated workflows. Now users can also edit them in the overview view and call up statistics on actual usage of the playbook. MatterMost is also introducing new settings for actions and triggers: they should allow for more detailed configuration of which ones the software should notify when and which webhooks they should trigger.

Ready-made packages for macOS and Linux

Lastly, there is also a change in the interface, a panel on the right side of the application will bundle extensions and apps in the future. It should also be easier for system administrators to install the desktop client: on the one hand, the program can now be found in the macOS App Store, which includes automatic updates through it, and DEB and RPM packages are now available under Linux.

All information about the update can be found in project blog, Mattermost is open source software that can be run on its own. As an alternative, the developers offer a cloud version managed by the project – it is free in a small installation, a fee is payable for many important functions and support of the company.