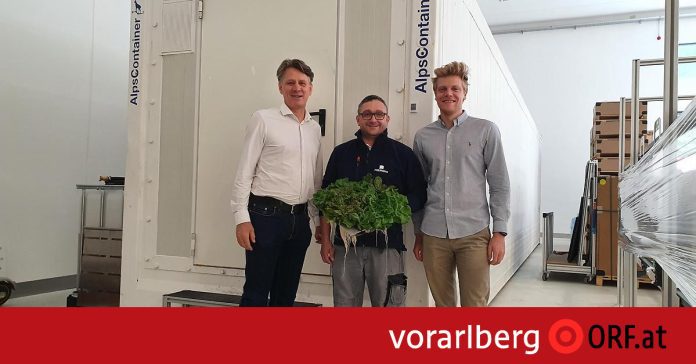 According to the trade press agency, the Vorarlberg company may have a say in future technology “vertical farming”, which is currently being tested internationally. It is about food production from crops that are planted in indoor spaces stacked on top of each other and supplied primarily with technology.

With its new subsidiary Vertic Greens GmbH, the Heron group of companies is moving forward in this globally recognized field. Software developer BoehlerBrothers and air conditioning company Hörburger are now on board as minority shareholders.

At Heron, this technology has so far been developed and tested in an inconspicuous shipping container between various metal frames in the farthest corner of the new building in Dornborn. Company founder Christian Beer, marketing manager Reinhard Kogler and project manager Maximilian Eiswirth explained in an interview with WPA that Heron has been researching and experimenting with vertical farming for five years.

For some time now, research and trial work has been going on on a smaller scale, mainly with lettuce plants. According to Beer, the fact that the project is kept as secret as possible is due to the great importance of this technology in ensuring that crops around the world are produced in a way that protects the environment and resources in the future. does. Crops are used not only as food, but also as medicines and for the production of cosmetics around the world.

Technology based indoor farming of crops

Vertical farming requires a building and energy combined with seed and nutrient solutions for sunlight simulated by LEDs. The self-contained system is controlled using state-of-the-art technology and artificial intelligence (AI) in an energy and resource-efficient manner and thus uses a fraction of the space and energy required in agriculture. It can produce at any location throughout the year regardless of the season and climate and without pesticides. Water consumption is reduced by 95 percent.

Possible in the middle of metros

Beer explains this with a comparison of numbers using a soccer field: “We produce the same amount on the area of ​​the target field surrounded by nets as agriculture does on the entire soccer field. The efficiency is 1 in 400. ” In addition, emissions during production are reduced by more than 90 percent. Because steep farming can be operated between conventions, which largely shortens the supply routes to the consumer.

Own information on process flow

In this development work, Heron benefits from knowledge of process flows and consideration of the entire value chain in a variety of industries using automation technology. “It is this knowledge base that we have built up over the years, which is now being adapted to vertical farming. Because it should also be possible to operate economically on a large scale.” The project involves 15 employees. BoehlerBrothers now IT and software is contributing information, while Hörburger is mainly focusing on technical issues (installation, etc.).

By the end of 2023, Vertic Greens intends to put into operation a large, fully operational and economically viable vertical agricultural production cell in the new Heron Building in Dornborn. Till then the trial operation will be gradually scaled up and comparative studies will be done. “The blueprint of this AI cell can be used around the world as a template for further production cells that can be scaled up as needed.” Beer estimates the investments made up to that point at around ten million euros.

However, Beer stresses that vertical farming technology developed in this way will not be assigned to Heron or Vertik Greens. “It stays with us. The goal is to run production wherever you are, for example, or as part of a franchise model.” Taking on investors is also one way to enable an international growth strategy. A decision on this is expected in the coming months.