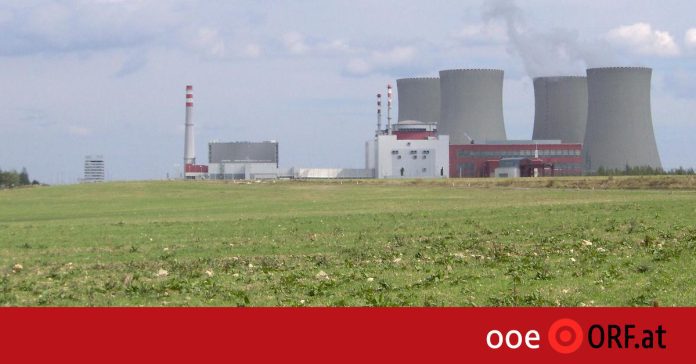 Czech nuclear opponents worry that the Czech Republic also seeks to simplify and speed up approval of nuclear facilities and nuclear waste repositories.

“Nuclear Experiment at Our Doorstep”

“These plans for the South Bohemian nuclear test park on our border increase the danger to Upper Austria,” warned environment provincial councilor Stefan Knader (Greens) during a local inspection with Austrian and Czech nuclear opponents on Wednesday. They would vehemently oppose “an atomic energy experiment that is to be carried out on our doorstep”.

In September, Prime Minister Petr Fiala and South Bohemian District Governor Martin Kuba announced the establishment of the South Bohemian Nuclear Park Company, reported Knader and Upper Austrian anti-nuclear commissioner Dalibor Strásky. The task is to install the first Czech SMR at the site of the Temelin Nuclear Power Plant by 2032. In addition, planning for Blocks 3 and 4 at Temelin is underway in parallel.

stockpile with 14,500 tonnes of radioactive waste

A nuclear waste disposal facility could also be built on a nearby site: Janoch is considered the “most promising” of the four possible locations. The Czech Republic is planning a repository designed for 14,500 tonnes of highly radioactive waste – so far the planned start of construction was given as 2050, but this will now be 15 years earlier due to the specifics of the EU classification regulation needed.

Mini Nuclear Power Plants: “Not Safe Because of Being Small”

According to proponents, SMRs – often called mini nuclear power plants – should be safer because they are smaller. Opponents insist that size has nothing to do with safety and therefore does not reduce the risk of accidents. However, it is feared that the approval authority will require fewer security precautions. According to a study by Ökoinstitut, according to local inspection, there are currently 136 different SMR concepts around the world, but none have yet been put into commercial operation.

According to Strasky, even the Czech Nuclear Regulatory Authority is in doubt. “Although the nuclear lobby has not yet been able to complete the district heating pipeline between the Temelin Nuclear Power Plant and Ceske Budejovice as planned, it sees itself poised to successfully build the new unit in Dukovany and at the same time the SMR pilot plant Temlin,” he doubts the rapid realization.

Licensing of nuclear facilities should be simplified

Nevertheless, even Czech opponents of nuclear power are worried about the realization. A draft is currently being discussed at the government level, which should simplify the approval of nuclear plants and nuclear waste repositories. Czech NGOs report that the rights of owners, communities and the public are to be curtailed, with deadlines for comments shortened and the possibility of appeal removed. “Approving a new nuclear reactor should be easier than approving the construction of a house or a playground,” fears Edvard Sečen, president of the Czech environmental organization Cella.