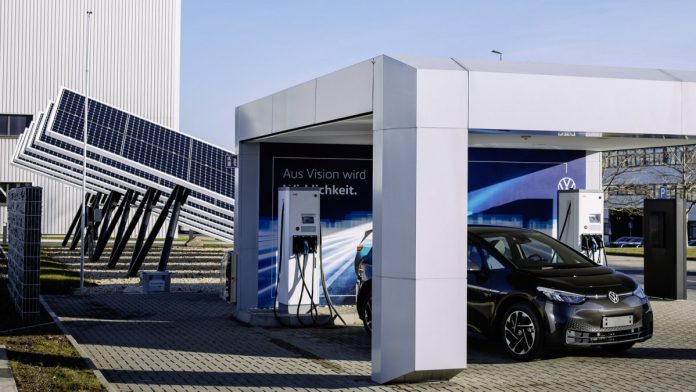 Most car manufacturers guarantee their batteries for about eight years. The companies promise that the capacity should not be less than 70 percent within this period. Renault recently concluded that the battery in the Zoe is supposed to last longer than expected. Even so, at some point the memory will become too bad for use in a car. It should be overhauled for further use and can be used again. Volkswagen has now launched such an effort at the Zwickau plant. There, old batteries are used as a buffer for the quick-charging station.

96 modules from pre-series VW ID.3 (tested) and ID.4 vehicles were combined to form a power bank with an energy content of 570 kWh. Its purpose is to temporarily store electricity from the solar system. The fast-charging park can charge up to eight vehicles simultaneously with an output of 75 kW. A total of three such stations are planned in the factory premises.

memory as a buffer

Such fast-charging stations may be installed relatively cheaply in future where the existing power grid is not yet available. They can also act as a buffer when there is an increasing demand for electricity to charge electric cars at certain times of the day. “The continued use of batteries is an important topic for the future that is closely linked to the ramp-up of electromobility,” emphasized Karen Kutzner, CFO of Volkswagen Sachsen.

Other manufacturers already use old batteries

Other car manufacturers also use unused batteries as a form of storage. Audi opened a “charging hub” in Nuremberg last year that uses lithium-ion batteries from dismantled test vehicles. BMW commissioned a so-called storage farm in Leipzig in 2017. The i3 electric car’s 700 batteries are given a second use on factory premises after being used in cars. According to a spokesperson, the storage facility is powered by four of the company’s own wind turbines. It supplies the production with electricity, but is also connected to the public electricity grid.

See also  Oculus Quest now supports Facebook Messenger, allowing you to stay in touch with friends while wearing a headset-gigazine