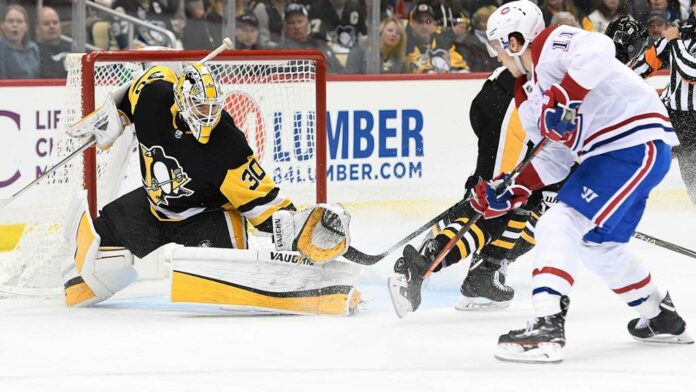 The Penguins are attempting to move on to the Stanley Cup Playoffs for a chance to win the Cup for the third time in five seasons after winning consecutive championships in 2016 and 2017. They defeated the Canadiens in two of three meetings this season, including the two most recent (3-2 in overtime on Jan. 4 and 4-1 on Feb. 14).

Montreal is looking to return to the playoffs for the first time since 2017. It last faced Pittsburgh in the postseason in 2010, when it won 4-3 in a best-of-7 series in the Eastern Conference Semifinals.

Here are three keys to Game 1:

Sidney Crosby and Jake Guentzel will play together in a game that is not an exhibition for the first time since Nov. 9, when Crosby was injured before having core muscle surgery Nov. 14. He returned Jan. 14, but Guentzel had shoulder surgery Dec. 31, which caused him to miss the rest of the regular season.

The forwards will be back on the top line with Crosby at center and Guentzel at left wing, joined by Conor Sheary on right wing. Crosby had 47 points (16 goals, 31 assists) in 41 games this season; Guentzel, who was named to the 2020 Honda NHL All-Star Game, had 43 points (20 goals, 23 assists) in 39 games.

See also  Can grandparents see grandchildren? Read this before visiting

“A lot of anticipation has built up over those months, not knowing what was going to happen,” Crosby said. “We’re here. We’re excited. We worked to get to this point. So it’s fun and we’re excited to play meaningful hockey.”

The starting goalie for the Canadiens was never in question. Carey Price, who was 27-25-6 with a 2.79 goals-against average and .909 save percentage in 58 starts this season, is the undisputed No. 1 goalie for Montreal.

But during training camp, Price said he can’t defeat Pittsburgh on his own, meaning forwards Tomas Tatar, Phillip Danault, Brendan Gallagher, Nick Suzuki and others must produce on offense.

The decision was less straightforward for Pittsburgh. Matt Murray was named the starter Saturday after competing with Tristan Jarry for the role throughout training camp. The two-time Stanley Cup champion (2016, 2017) was 20-11-5 with a 2.87 GAA and NHL career-low .899 save percentage this season.

3. Turning on the power

Neither team impressed on the power play in its respective exhibition game Tuesday.

Pittsburgh was 0-for-3 with the man advantage in a 3-2 overtime loss against the Philadelphia Flyers. Montreal was 0-for-6, and allowed two shorthanded goals, in a 4-2 loss to the Toronto Maple Leafs.

The Penguins and Canadiens were also inconsistent on the power play during the regular season. Pittsburgh was 16th in the NHL (19.9 percent); Montreal was 22nd (17.7 percent).

A win Saturday could come down to which team takes advantage of its opportunities on the power play.

Unfit to play: None

Unfit to play: None