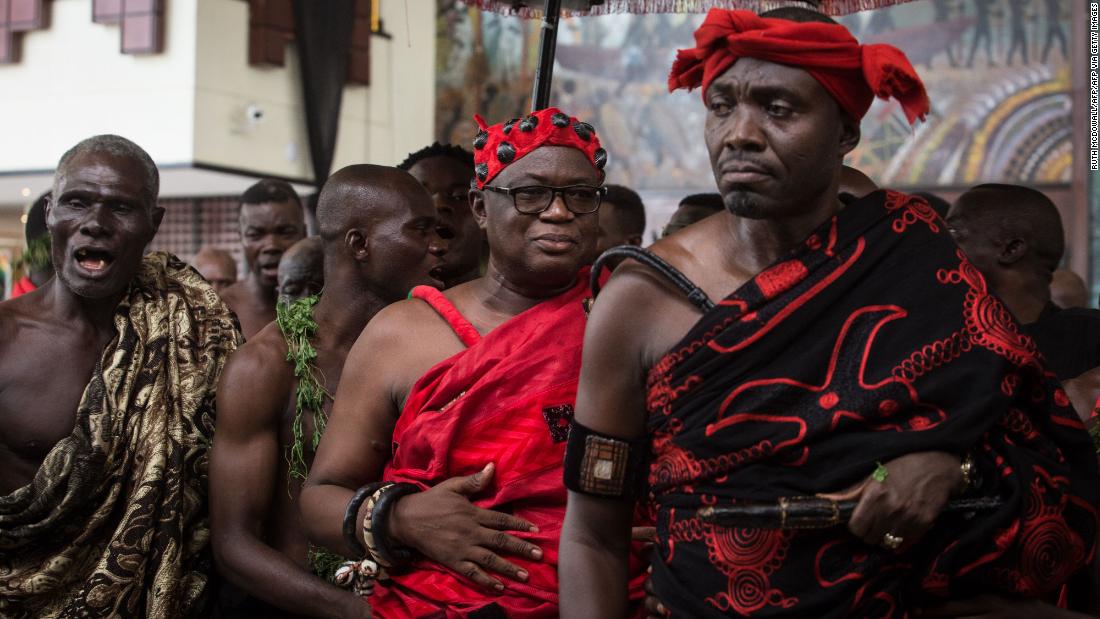 “We are running out of space,” the hospital director, Dr. Frank Baning, told CNN at the facility located in the northern part of the Greater Accra region of Ghana.

Since the coronavirus pandemic put an end to large public gatherings, relatives opted to keep the corpses of their loved ones in the morgue longer than usual until they can hold an adequate funeral.

“It was difficult because there aren’t many other mortuaries around to hold the bodies,” said Baning.

‘Only if we are forced’

The Ghanaian funeral usually lasts several days and up to a week in parts. They are deeply symbolic ceremonies involving thousands of mourners to celebrate the life of the deceased.

So it was a bitter pill to swallow for many when the country’s president, Nana Akufo-Addo, imposed a ban on large gatherings.

He offered an alternative: perform a private burial with no more than 25 guests.

Ghana currently has more than 6,486 coronavirus cases and 31 deaths have been confirmed, according to the latest data from the ministry of health. Earlier this month, Akufo-Addo extended the limitation of public meetings until May 31st.
Some families have taken this pathbut overall, many relatives have decided to wait until the ban is lifted to bury their loved ones.

Chris Awuyah, a Ghanaian professor based in the United States, lost his uncle in Ghana to natural causes in February.

“Over 2,000 people were expected to be present at his funeral,” he told CNN. This all changed when government restrictions prevented the funeral from taking place as planned.

“Much of the funeral is about bringing families together. What matters to us,” says Awuyah, whose 87-year-old late uncle, Jonas Awuyah, was considered the head of the family.

“We hope we can organize an appropriate funeral for him.”

He acknowledges that his family has not yet reached a definitive conclusion whether to bury his uncle privately or to postpone the burial to a later date. But he has hinted that he is willing to wait as long as possible until an appropriate funeral can be planned.

“The only way we will keep it [the funeral] privately it is if our hands are tied and we are forced. We are afraid of having to make this decision. “

A risk for healthcare professionals

Meanwhile, in Pantang, some expressed concern that the number of bodies in the morgue created congestion, putting the health of workers on the front lines at risk.

Thomas Awuku worked at the Pantang morgue for 27 years. According to the World Health Organization, there are risks for those who handle corpses “if the deceased is infected [a] highly infectious disease. “

Awuku told CNN that the hospital has taken all appropriate measures to ensure the safety of its workers “and will maintain the bodies we already have as a respect for families.”

Despite the overflowing of bodies, the hospital is reluctant to resort to mass burials because WHO warns that this can have harmful psychological effects and “traumatize families and communities”.

It’s part of why Pantang hospital is working with families to keep bodies as long as possible, says Awuku.

The Ghanaian health service did not immediately respond for a request for comment and the country’s health minister declined to comment when reached by CNN.

In Gillman and Abbey Funeral Services located in Accra, they also saw an increase in the number of bodies stored in their morgues.

The conservation of the bodies is charged at a daily rate, but fewer families are organizing the removal of the bodies.

CEO Lawrence Apaloo says the pandemic has been “completely bad for the company”.

“Of course, the longer the body is here the higher the bill will be,” he says. “But it is unpredictable to know when the family will come to collect the body.”

Other services provided by Gillman and Abbey, such as ball bearings, hearse rentals, the sale of caskets and decorations for clubs, have come to a complete halt, he says.

“Everything is pending and nobody knows when things will return to normal. It required a huge tribute.”