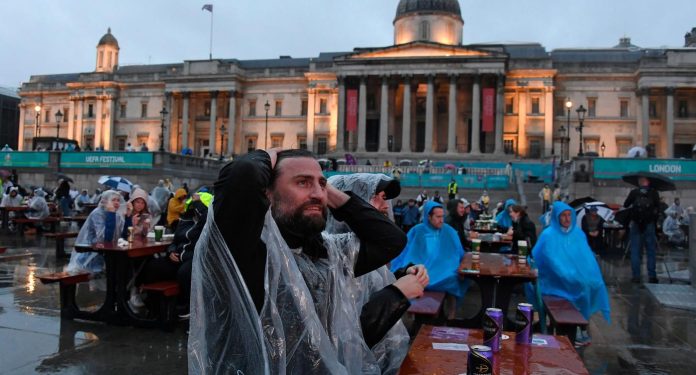 How could this happen? The 0-0 draw against Scotland gives the English a headache. Chances of reaching the Round of 16 are still good, but conservative attendance raises questions. The Scots, on the other hand, are already dreaming of the next coup.

England nodded again. 0-0 draw against old rivals Scotland, how could that happen? Then at home at Wembley Stadium!

“We look like hard, old England again,” former national player Rio Ferdinand complained after an unimaginable performance against the outsider. After just one week of the European Football Championship, the former co-favorite status on the island is beginning to falter. First experts criticize coach Gareth Southgate, media are looking for reasons for the shock, players are disappointed. And everyone asks the same question: Was that a one-sided jerk? Or what’s next?

“Scotland brave-hearted, England half-hearted” was the headline of The Daily Telegraph. Even Southgate admitted that his team did not do enough to win against the valiantly fighting Scots. But the 50-year-old quickly tried to look ahead. “It’s a tournament,” insisted the former professional. “A point is still an important step on the way to the next round. And that is our first goal.” Southgate is right: With four points now on hand, the Three Lions are in the final round of 16 ahead of their final group game against the Czech Republic on Tuesday. can plan practically.

But most fans in England certainly do not look restrained against their neighbours. At the start of the tournament, much revolves around the fundamental problems of this team. Goalscorer and captain Harry Kane has so far been seen in the European Championship as his replacement shortly before the end of both 1–0 openers against Croatia and Scotland. “Harry Kane seemed out of place because the system didn’t work around him,” The Guardian wrote. It’s problem number two: Phil Foden, Raheem Sterling, Marcus Rashford or Jack Grealish don’t ignite the overly talented wing pliers around. And Jadon Sancho? He didn’t even play.

Sancho is not allowed to play again

“We have all these players. mold? what has he done? Something must have happened behind the scenes,” suspected ex-national player Ferdinand. In the Three Lions’ first game against Croatia, the Borussia Dortmund striker was also not in the squad. “I really don’t understand. In the first game he didn’t even sit on the bench, in the second game he didn’t come on the field. You’ve got such great talent sitting there,” Ferdinand criticized. Southgate made only two changes against the Scots, although he could make a maximum of five changes. It also causes the head to tremble at the sight of the width of the squad.

But despite all the talent: England rarely found a solution against densely staggered and deep guests in the incessant rain at Wembley. Excited by their own fans, Scotland defended with heart and soul and the Bravehearts now want to carry that spirit with them into Tuesday’s group final against Croatia. Captain Andy Robertson said, “It is important that we have a feeling from the fans and now from us that it has not been in vain.” “We have to use that to get to the round of 16.”

For that, the Scots need a win against the vice world champion. It doesn’t seem impossible. Coach Steve Clarke’s team can play again on Tuesday at their Glasgow home at Hampden Park. There his own supporters would celebrate even louder than at Wembley. English fans will also want to celebrate again on Tuesday. It now depends on your team.