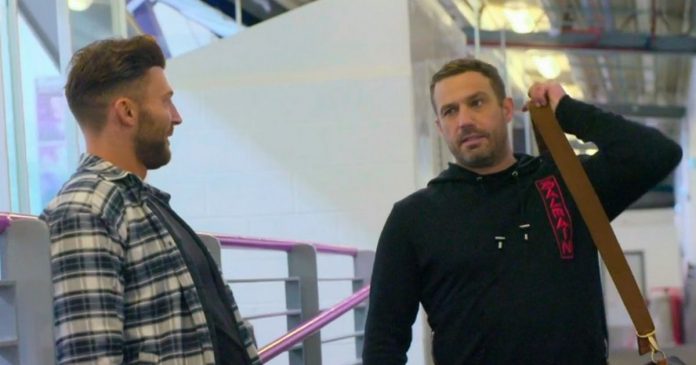 Real Full Monty on Snow Spectators was quick to see a little tension between Jamie Lomas and Jack Quickandon tonight.

This year’s show sees a new line-up of brave celebrities with a full monty on the ice making Fox’s Wonderland spectacular – without thermal in sight.

The purpose of the show is to raise awareness about cancer in intimate areas of the body and to help save lives at the earliest.

But as the celebrities met each other on the ice rink, fans opted for a “dirty look,” as Jamie shot Jack as he walked through the door.

Jamie shuddered after talking to other celebrities as he told coach Ashley Banjo that he was not sure if the project was for him.

Ashley tried to talk to Jamie on camera but Jamie walked away and said he didn’t want to speak on the film.

Jamie was persuaded to continue with the day, but as Sebelio dressed up as an icebreaker out on the ice, Jack found him hateful again as Jack tormented him.

Dancing on ice winner Jack as he showed off his skating skills, Ashley said his ego is very clear on the ice.

Jamie was seen saying “F *** ing show” when he skated next to her.

And viewers were quick to comment on the tension between the pair.

Kee said: “It’s me. It looks like there’s an issue between Jamie and Jack.”

Tara said: “Wait, what’s the beef between Jack and Jamie? He would have died by sight.”

chrimbow said: “Jamie can be seen when he sees Jack.”

Louis Allen said: “Did I imagine turning the eyes of Jamie Lomas when Jack Quickandsen went inside?”

Despite her initial reservations, Jamie decided to continue with the show and thanked her fellow celebs for their support.

He said: “I was thinking about walking, but I thought it was for some great reason so thank you for your support.”