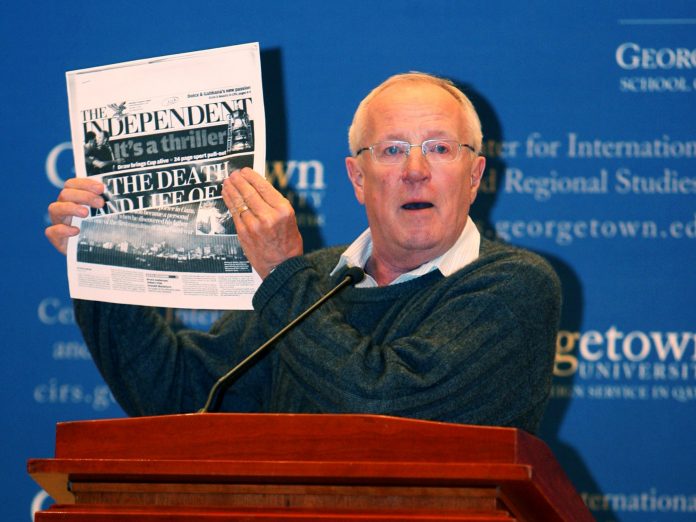 Robert Fisk won perhaps more prestigious awards than any other journalist – collecting dozens of awards and dozens of awards – he did not display them in his Irish home, keeping them away from wit.

Although he was not a man to brag about, he established himself as one of the best British foreign correspondents of every decade since the 1970s. While there were many other excellent journalists, he distinguished himself mainly by his bravery, his insight, and his superb writing skills. Independent.

He was both fearless in telling the truth to the authorities and in frequent trips to places of great danger. One of his homes was near Dublin but the other was Beirut, where journalists were always at risk of being abducted.

Born in Maidstone, Kent in 1946, Fisk wanted to be a film critic as a schoolboy, telling an interviewer last year that he was “fascinated by the film because it has an inexhaustible power to persuade.” The film will impress his career choices with the character of Hitchcock’s wartime film hero Huntley Haverst rst. Foreign correspondent Inspired by a young fisherman.

The beginning of his career. Sunday Express, But isolated himself in Belfast in the 1970s, after he became the first Northern Ireland correspondent. Time In 1972. It was a city where many news organizations tended to repeat the often dubious official versions of many controversial events. But Fisk checked everything and checked twice, refusing to accept what the authorities claimed, much to the displeasure of the British government and army at times.

Fisk’s reporting philosophy, which will be present for the rest of his career, he summed up in the price he gave decades later: “You have to go after whatever source you can.” He was always ready with a notebook in his hand. “I was amazed to see him reporting on the war,” he said, reporting his time in Belfast. “I always refer to Northern Ireland as a war, not a trouble.”

Fisk also reported from Portugal for the paper, before becoming a Middle East correspondent in 1976. Located in Beirut, he eventually occupied an apartment located on his famous Corniche, often spending part of his evenings on the balcony. Yet, in a sense, he never really left Ireland. He wrote two books about this, and also bought a magnificent house overlooking the sea at Dal Lucky, just south of Dublin, and frequented there. Later, after living in Beirut for years, he added several Middle Eastern touches to the building.

Fisk was captivated by the insecurity and recurring violent conflict in the Middle East and will report on the civil wars in Lebanon and Algeria, the Iran-Iraq war and the Soviet invasion of Afghanistan. With the Fisk International Reporter of the Year winning at the Press Awards in 1979, the awards will never be far off, repeating itself as it departs from the 1980 Iran-Iraq conflict.

Fisk was the first journalist to enter the Sabra and Shatila refugee camps, where more than 1,000 people were killed in 1982. This was a situation that helped him forge as a journalist. He wrote, “The Israelites saw nothing and did nothing. “I entered the camp with two comrades before the assassins completed their war crimes. I hid with an American journalist in the back yard of the hut next to the newly hanged girl. I climbed on the corpse’s throat. That evening, I burned my clothes because they smelled rotten. “

He would then say of the massacre: “I remember thinking: If these people had spirits, they would want me to be there. I thought for that reason they would treat me like a friend. So I wasn’t horrible. I was afraid he had been killed, but that [manifested itself in] Anger

He will win the second International Reporter of the Year award for that dispatch, which the judges called “dispersing” both shocking in its descriptive power. [and] Almost unbearable in its total effect. The judges added that their other work in the Middle East “demonstrates the same determination to find the truth and the same sensitivity to human suffering in war.” The following year, Fisk will win the Overall Reporter of the Year award for his work covering Lebanon’s civil war.

More success, and a B.A. from Lancaster University in the late 1960s. After graduation, Fisk received a PhD in political science from Trinity College Ledge Dublin in the mid-1980s, noting Ireland’s neutrality during World War II.

Fisk will leave Time After a controversy over how one of his stories was handled in 1989 and later, he would write an insult to the title’s owner, Rupert Murdoch. He joined Independent, Where he will spend his whole life – a period that includes two weddings and countless trips around the world.

He became known for his willingness to venture into dangerous areas and his writing. He made no secret of his personal views – keeping the report on the Armenian genocide at one point. Becoming a clear critic of the US and Israel at the same time writing and speaking out for the victims. His writing can be controversial – such as his later reports on Syria – and sometimes ruthless. Fisk’s style meant that he chose detractors, but also many loyal readers.

At Independent, Fisk will win the International Reporter at the Press Awards twice more in 1994 and 1995 for dispatch to Bosnia and Algeria – as well as the Amnesty International Media Awards and the Orwell Prize in 1999.

A series of interviews with al Qaeda chief Osama bin Laden will make Fisk’s name truly global. At their first meeting in 1993, Fisk visited the man three times, describing him as “every inch of the Mujahideen legend.” This was followed in 1996 and 1997 by further meetings with the man who would become the FBI’s most wanted terrorist. Fisk undoubtedly made an impression on the man who would be synonymous with the 9/11 attacks, the U.S. Published bin Laden’s personal papers. 2016 makes that clear.

In an unsolicited letter to bin Laden about the upcoming tenth anniversary of the September 11 attacks, he called for media attention. He recommended that his lieutenants keep Fisk moderate in reaching out to CBS, another anonymous American network, and Al Jazeera’s Islamabad bureau chief.

The so-called terrorist war after the 9/11 attacks will mark Fisk’s writing in the remaining days. His departure from Baghdad was the fault of the UK government when the US-UK bombing campaign in Iraq began in 2003. His observation was always clear for those governments or leaders who would try war or eliminate suffering. It was a thread that will also be present in his coverage of the 2011 Arab Revolution and the war in Syria.

In addition to his hundreds – or perhaps thousands – of newspaper stories, he also immersed himself in the history, politics, and culture of the Middle East, producing numerous books. His books are included Return Int No Return: The Strike That Broken the British in Ulster (1975), Nation of Mercy: Lebanon at War (2001), The battle for great civilization – the conquest of the Middle East (2005), and Variety Age: Selected Essays (2008).

When I asked him at his Irish home, when we were surrounded by manuscripts he was just about to deliver it to his publisher, when it would get lighter and take things easier, he said hesitantly, “I’m just two big books to do. . “I don’t believe this is ever over.

Another big part of his life evolved when he was forced to negotiate the Middle East in many countries. When he started doing this, the craze for tickets was so great, Fisk often attracted more than 1000 spectators. An event in Dublin, hosted by her Connor O’Callarie friend of journalism, was attended by 1,200 people. Fisk’s work was also featured in the 2019 documentary This is not a movie.

It was the pull of a man who helped readers understand the world – and its injustices – as best he could.