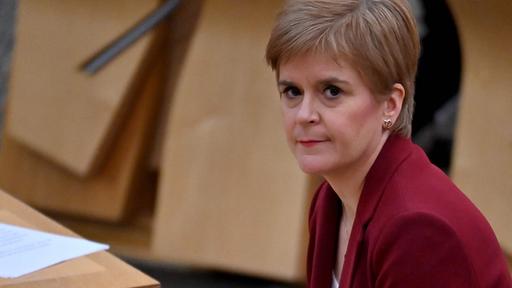 Scottish Prime Minister Sturgeon campaigned for independence at his party’s online party conference. But there are already major obstacles to a new referendum.

The name “Scottish National Party” could lead one to suspect a right-wing party behind the SNP. Often the parties representing forms of nationalism are located in the right-wing spectrum. The SNP is not a rightist, but a left-liberal party, which is basically one. It stands for a Scotland that emphasizes its Scottish identity, but is also open to the world and integrates those who want to live and work in Scotland.

On the other hand, the SNP relies on delimitation when it comes to the British government in London. You accuse the SNP of ignoring or protecting Scotland. The SNP’s online party conference shows how deep there is a gap between the Scottish regional and British central governments. Westminster, it was heard from the participants, detests the Scottish Parliament and betrays Scottish interests. The SNP is therefore demanding the independence of Scotland.

The SNP now aims to separate Scotland from the United Kingdom so that it can rejoin the European Union as an independent country.

How are the chances?

If you go through opinion polls, the chances are relatively good. Support for independence has increased among the Scottish population during the coronovirus epidemic. Since spring, pro-independence advocates had a majority in 14 consecutive elections, if only barely.

One reason for this development is probably that Nicola Sturgeon, the Scottish head of government and president of the SNP, gained even more stature and popularity during the crisis. With her crisis management she brings seriousness and competence and is completely different than Boris Johnson. The Prime Minister is very unpopular in Scotland anyway, and with his recent statement that the transfer of political powers to the Scottish Parliament would have been a disaster, he would not have received any sympathy points.

Johnson does not want to agree

Voting on the Scottish independence question only really mattered if there was a vote. The problem with the SNP is that it cannot do so on its own as Scotland needs the approval of the British government to hold a new independence referendum. Johnson has made it clear that he will not approve this.

The SNP now seeks alternative ways to legally hold a referendum. But Sturgeon has no legal means to force a referendum. Her calculations are therefore different: She wants to form a party, which currently has only a minority government, so strong in the Scottish parliamentary election in May that it could put Johnson under political pressure.

“The right to decide their future”

“The people of Scotland have the right to decide their future,” is the SNP’s key sentence. If the majority of voters vote for the SNP and thus indirectly speak in favor of independence, Johnson can no longer deny the referendum, the SNP believes. Otherwise Johnson would have stood in the way of democracy. Should Westminster actually vote one day in an independence referendum and block it, it could lead to a constitutional crisis.

From an economic standpoint, independence is not necessary for Scotland. More than 60 per cent of Scottish exports go to other countries in the state, most of them in England. But there would be a difficult border between Scotland and England if Scotland became independent and became a member of the European Union. In addition, Scotland receives tens of billions of euros annually from London. Without these grants, which correspond to a type of national financial equation, there would be a huge difference in the Scottish budget.

The decision in favor of Scottish independence will be primarily a political one and one in which the question of identity plays a large role. In this regard, the approach would be similar to Brexit, which most Scots reject.