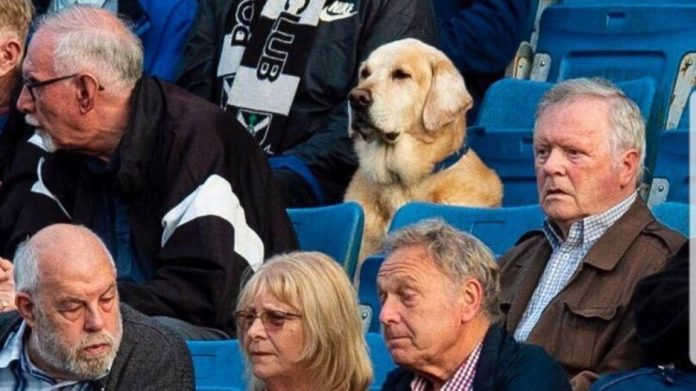 Golden retriever Yardley is a star among Pollock FC fans – and a regular at the Scottish club’s stadium. This is not uncommon in the lower leagues.

This loyal fan has a cold muzzle: Golden retriever Yardley rarely misses a Pollock FC game – and is usually seated in the middle of the Scottish club’s grandstand seat.

For years he has been coming to the stadium in the Glasgow suburb of Newlands to watch games in the fifth Scottish league with his mentor. Before each game, the owner buys the dog a three-pound ticket – although the man is actually a fan of first-class club FC St Mirren. He named his retriever after former star striker Mark Yardley.

Dear Nose Yardley, however, has no chance of first-class professional football with the Scottish Premier at FC St Mirren. Dogs are banned in the stadium there. So that the four-legged fan still gets his money’s worth, Dog and Master simply turned into a real underdog: Yardley and his owner participate in semi-professional Pollock FC games away and at home – Fifth Rate West Zone. in the Premiership.

The club officials of the small Glasgow suburban club are enthusiastic: first they headlined their stadium magazine with the sympathetic Golden Retriever, then Yardley also got a role in an image film for Pollock FC. He turns out to be a secret star for other fans, in the video he even shares fan utensils and snacks with a four-legged friend.

Now considering making the dog an honorary member should also be considered. A great sausage for the master and the dog. But the club benefits too – and solidifies its image in fan circles and social networks with the living mascot. A classic woof-woof, um, win-win situation.

Animal Fans: A Dog in a Football Stadium Isn’t So Rare

Dogs are not uncommon as stadium spectators in Europe’s lower leagues. This is evidenced by several recordings that users on twitter And Instagram under the account “nonleaguedogs”” gather.

Whether in gangs, with the nose in front of stadium sausage or in jerseys in club colours: football-crazy dog ​​lovers or dog-crazy football fans clearly have as much fun with this account as Yardley has with Pollock FC did. Of course, he is already represented among the “nonleaguedogs”.