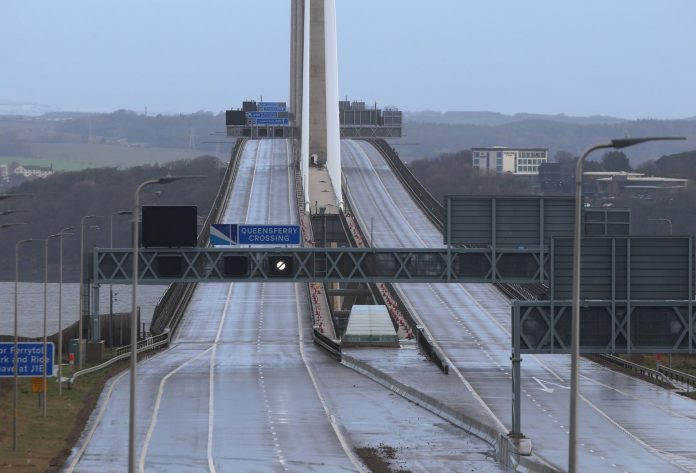 The new sensors failed to give enough warning to close Scotland’s main road bridge before it could pose a potential risk to snow motorists, the Herald has been told.

Patrol personnel saw snow fall after the Queensferry Crossing connecting Edinburgh and Fifa was closed to vehicular traffic in both directions at 45.45am on Friday.

It is the third winter in a row that પડ 1.35 billion worth of crossings have been troubled by falling snow and forced to close for a second time.

But the road was closed for four hours only after the snow fell, it was confirmed.

Colin Smith, a spokesman for Scottish Labor Transport, said: “The safety of bridge users always comes first, but SNP The government’s excuse that the Queensferry crossing continues to be closed due to the wrong type of snow and ice has become a national embarrassment.

“New sensors will now be able to tell us when there is a problem, but people are rightly frustrated that the SNP is not working. The government cannot find any technical solution to reduce or reduce such dangerous build-up of ice.

“This is the first flash of snow this winter and there is a danger that the bridge may be more closed to wait for users.”

Conservative Mid-Scotland and FIF MSP Dean Lock Kahart said: “Last year, the Scottish government promised that the installation of new ice sensors would stop the issue from recurring, although we are still in a situation where ‘wrong kind of ice’ has been created. That is not acceptable.

“We need a long-term solution to this problem, which would allow the use of the Fourth Road Bridge.”

Transport Scotland was previously criticized for its lack of action following reports of snow on vehicles in February.

It said the Fourth Road Bridge is now trying to be used in all traffic in cases where the Queensferry crossing has been closed due to the risk posed by ice formation.

When it opened to traffic in 2017, it was hailed by Prime Minister Nicola Sturgeon as “a symbol of confidence, a Scotland that looks forward” and “a feat of modern engineering”.

Before it opened, bridge operators said the mm-high wind shield would “completely eliminate the need to close”.

And early last month, it announced efforts to curb the issue of installing ice sensors.

Infrastructure Secretary Michael Matheson suggested the administration had learned a lesson last winter when Payne was the result of Scotland’s largest infrastructure project that closed the crossing, followed by reports of snow on vehicles for another year.

In February, eight vehicles were damaged before the crossing was closed for the first time since it opened in 2017 for safety reasons.

As the drivers took the 35-mile diversion across the Kinkardin Bridge, it led to long tails.

Snow issues were then urgently investigated, including a 1.7-mile publicly funded bridge that collapsed three months after ic Bhela Ikels smashed the windscreen of three cars.

The Herald had previously revealed that the problem arose despite the existing multi-million pound sensor system being unable to detect ice properly.

In early November, it was confirmed that ice sensors had been installed at the Queensferry Crossing, as part of “several measures to improve the detection and operation of ice hoisting”.

As the new measures were announced, Mr Matthews said: “Our teams have always looked to learn from the past winter and have worked hard once again to make sure we prepare well even in bad weather.

See also  How to book your Covid-19 test online

“This includes everything from the use of new technology to ice isolation sensors and motorway access units to testing new treatments and adding more loopholes to our fleet.”

At the time of the February incident, Mr. Matthews said there was a similar problem last winter when some cables were covered in snow and ice, but the bridge was not closed.

Mr Matheson said: “I recognize the frustration of the passengers today, and I am very sorry that the bridge has been closed for the first time, but it is a bridge that has given us much more resilience than the old Fourth Road Bridge.

“There are now 30 occasions like this when we would not have only partially used the Fourth Road Bridge, when the Queensferry Crossing is in operation.”

The Scottish government then confirmed that it planned to install ice sensors on the constitution “in the coming months”.

Chris Tracy, manager of bridges at Rees Scotland’s South East unit, said: “The safety of bridge users comes first and so we decided to temporarily close the Queensferry Crossing when we recognized the risk of snow falling.

“We are constantly monitoring the conditions at Queensferry Crossing in real time, using the Bepoke system of weather sensors on towers and decks. At 04:30 this system is said to be conducive to the formation of ice. Patrol staff saw snow falling from the bridge towers shortly after this and the bridge was closed at 04:45.

“We apologize for any inconvenience this road users may have caused.”

Bear Scotland said of the new detection system: “The new ice sensors at Queensferry Crossing will not stop making ice, although they will improve our understanding of the issue and give us a little early warning when conditions are conducive to ice stimulation.

“Sensors monitor four weather conditions that we know cause ice excitation when they converge to certain parameters. This will help in giving early warning of such situations and will allow the conditions to be measured and understood more accurately. ”

“Due to the accumulation of snow / ice and the occurrence of snow falling from the bridge towers, it was decided to close the bridge for public safety.

“Work is currently underway on the Fourth Road Bridge to replace the original Bespoke extension / movement joints, currently only the North-Bound Road Rageway is open as a public sector transport corridor under contractflow. The work is expected to be completed next week, and when completed will allow the Fourth Road Bridge to be used as a diversion route if necessary.

“By working with our operating company we are looking to test the process of changing traffic between the two bridges – from the point of view of being able to switch in advance to adverse snow and ice conditions in the future, where the forecast indicates that there is more risk. Issues of ice aggression at Queensferry Crossing. ”