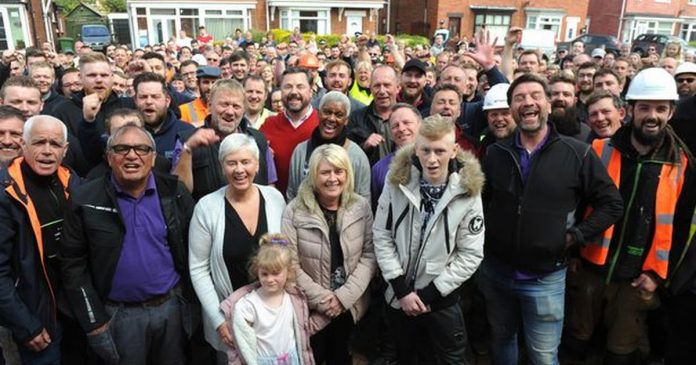 A team of scavengers electricians have helped transform the home of the accident-stricken Scantharp family in an episode of DIY SOS.

The show, which airs tonight on BBC One, looks to be a complete renovation of the Blanchard family’s house, which suffered two tragic deaths while living at home.

In 2007, seven-year-old Natasha died tragically while riding a mini motorcycle in the family garage and hitting her in the head.

Only nine years later, Father Paul died of a heart attack in the family’s servitude.

This son mom Caroline was unable to take care of her son Reese and daughter Paige alone, meaning she was on top of maintaining her home.

More than 300 local builders and merchants took part in the project to help transform Blancard’s family home, including a team of electricians from Skageness.

Wayne Fothergill, along with two other electricians employed by Wayne’s company, WAF Electrical, saw him advertising on social media and applied to be part of the project, saying it was an “incredible emotional experience.”

The 1-year-old said: “Four teams of electricians participated and we were there during the project period.

“We entered the first fix, before the cameras were there, and then went back to the second and third fix while they were shooting.

“In some ways it’s hard because there’s a lot to shoot and shoot and so it can take longer than it really needs to work.

“But it was a really great thing to be a part of, it was so emotional.

“It’s so much on that TV, there’s a great camaraderie between everyone on the project.

“We have built really good friendships with some of the other traders we met in the project.

“It seems like everyone is there for a reason. It was a very healthy experience.”

The DIY Sauce team will completely redevelop the home for the family, remove the daily reminders they lost and hopefully change their lives for the better.

Carolyn and Reese also talk about the impact of losing Paul and Natasha on her family.

The build was one of the largest and most intensive projects the team has worked on, completely replacing the house, garden and garage in five days.

DIY Sauce: Big One will air on BBC One tonight at 8pm.