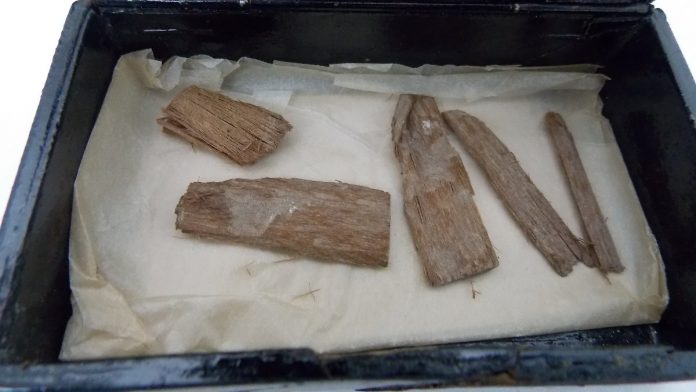 The wood from the pyramid originated in Scotland

At the University of Aberdeen, a curator comes across an ancient piece of wood. It turns out: The artifact comes from the Queen’s Room of the Egyptian Pyramids of Cheaps. The piece came to Scotland, possibly through the friendship of two explorers.

A 5000-year-old piece of wood from the Great Pyramid of Egypt’s Chaps was found in a Scottish university cigar box – due to an accident. It is one of only three parts that were ever brought out of the so-called Queen’s Chamber, the University of Aberdeen said. The piece is made of cedar wood and is estimated to date between 3341 to 3094 BCE. It is believed that it was used in the construction of the mausoleum.

The archaeologically significant artwork was discovered by an Egyptian employee while she was investigating the Asian collection of museum collections. Abir Aldani observed that the box was supposed to come from North African Egypt and therefore it did not fit into the Asia collection.

When he checked the serial numbers, the curator realized that it was the missing piece. According to the announcement, it was only a small piece, but it was of considerable importance.

The other two pieces from the Queen’s Chamber are a ball and hook, both of which are in the British Museum in London. The artifacts were found by Weinman Dixon, a Scottish railway engineer, when he discovered an unknown shaft unknown in the Great Pyramid in 1872. The fact that the lumbering finished in Aberdeen may be due to James Grant – he studied medicine at university and later befriended Dixon in Egypt. Together they discovered the Great Pyramid of Chops.