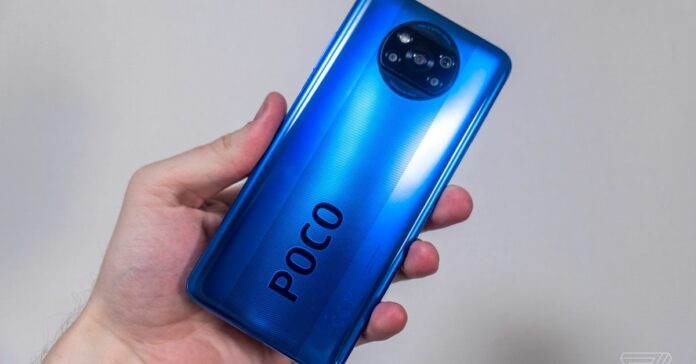 Xiaomi’s Poko sub-brand has announced its latest phone, the Poko X3 NFC. As you might have guessed from the inclusion of “NFC” in the name of the phone, this is not a device targeting a typical flagship audience. Also like Others Recently Poco Phones, X3 is a strong proposition from the point of view of NFC price-performance.

This isn’t a micro phone, even before you go for the huge glossy “Poko” logo on the back of the plastic. It’s big and chubby with a 9.4mm thick and 215g big camera bump – but that’s what you get when you build a phone with a huge screen, a huge battery and a bunch of cameras.

The display has a 6.67-inch 1080p panel with a refresh rate of 120 Hz. It’s the LCD, which means that even these days mid-range devices aren’t as contrasting as normal OLED screens, and the panel’s choice also means that the fingerprint sensor is on the sleep / wake button instead of being integrated into the display. It doesn’t look bad, though – it’s sharper than 1080p OLEDs of the same size, and the 120 Hz refresh rate is usually only found on more expensive phones.

The Poco X3 NFC is the first phone to use Qualcomm’s new Snapdragon 732G processor, a speed-bumped version of the 730G found on Google’s Pixel 4A. It supports LTE – not 5G here – and comes with 6GB of RAM. There are options for 64GB or 128GB storage, and there is also a microSD card slot.

My camera choices include a 64-megapixel Sony IMX682 primary sensor, a 13-megapixel ultraviolet, and a 2-megapixel sensor for macro and depth functionality, mostly just to make the phone look good with four cameras. The selfie camera is 20 megapixels and is housed in a hole-punch display cutout.

The battery is 5,160mAh and can charge fast at 33 W on USB-C. Xiaomi claims regular use for more than two days, plus the ability to get a full charge in 65 minutes or 62 percent in half an hour. Other hardware features include decent-sounding stereo speakers, reasonably good heptics, and a headphone jack. And NFC, of ​​course.