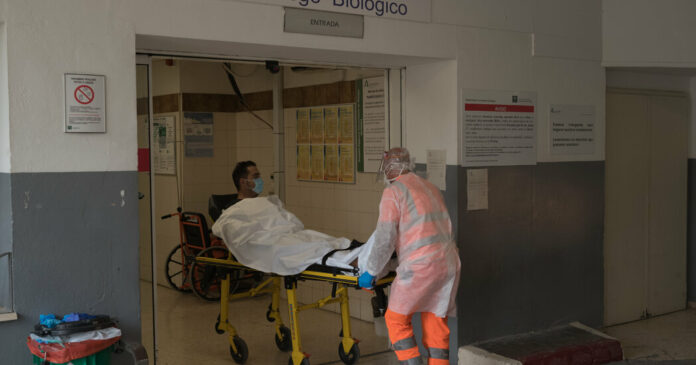 MÁLAGA, Spain — At midday on Sunday, there were 31 patients inside the main coronavirus treatment center in Málaga, the city with the fastest-rising infection rate in southern Spain. At 12:15 p.m., the 32nd arrived in an ambulance. Half an hour later came number 33.

The garbage can by the door overflowed with masks and blue surgical gloves. Relatives hovered in silence outside — one of them in tears, another feeling a pang of déjà-vu.

“My brother-in-law had the virus in the spring,” said Julia Bautista, a 58-year-old retired office administrator waiting for news on Sunday of her 91-year-old father.

“Here we go again,” she added.

If Italy was the harbinger of the first wave of Europe’s coronavirus pandemic in February, Spain is the portent of its second.

France is also surging, as are parts of Eastern Europe, and cases are ticking up in Germany, Greece, Italy and Belgium, too, but in the past week, Spain has recorded the most new cases on the continent by far — more than 53,000. With 114 new infections per 100,000 people in that time, the virus is spreading faster in Spain than in the United States, more than twice as fast as in France, about eight times the rate in Italy and Britain, and 10 times the pace in Germany.

Spain was already one of the hardest-hit countries in Europe, and now has about 440,000 cases and more than 29,000 deaths. But after one of the world’s most stringent lockdowns, which did check the virus’s spread, it then enjoyed one of the most rapid reopenings. The return of nightlife and group activities — far faster than most of its European neighbors — has contributed to the epidemic’s resurgence.

Now, as other Europeans mull how to restart their economies while still protecting human life, the Spanish have become an early bellwether for how a second wave might happen, how hard it might hit, and how it could be contained.

“Perhaps Spain is the canary in the coal mine,” said Prof. Antoni Trilla, an epidemiologist at the Barcelona Institute for Global Health, a research group. “Many countries may follow us — but hopefully not at the same speed or with the same number of cases that we are facing.”

To be sure, doctors and politicians are not as terrified by Spain’s second wave as they were by its first. The mortality rate is roughly half the rate at the height of crisis — falling to 6.6 percent from the 12 percent peak in May.

The median age of sufferers has dropped to around 37 from 60. Asymptomatic cases account for more than 50 percent of positive results, which is partly due to a fourfold rise in testing. And the health institutions feel much better prepared.

“We have experience now,” said Dr. María del Mar Vázquez, the medical director of the hospital in Málaga where Ms. Bautista’s father was being treated.

“We have a much bigger stock of equipment, we have protocols in place, we are more prepared,” Dr. Vázquez said. “The hospitals will be full — but we are ready.”

Yet part of the hospital is still a building site — contractors have yet to finish a renovation of the wing of the hospital that deals with coronavirus patients. No one expected the second wave for at least another month.

And epidemiologists aren’t certain why it arrived so soon.

Explanations include a rise in large family gatherings; the return of tourism in cities like Málaga; the decision to return responsibility for combating the virus to regional authorities at the end of the nationwide lockdown; and a lack of adequate housing and health care for migrants.

See also  Germany supports Turkey against Greece in the Aegean

The surge has also been blamed on the revival of nightlife, which was reinstated earlier and with looser restrictions than in many other parts of Europe.

“We have this cultural factor related to our rich social life,” said Ildefonso Hernández-Aguado, a former director-general of public health for the Spanish government. “People are close. They like to get to know each other.”

For several weeks in places like Málaga, nightclubs and discos were allowed to open until as late as 5 a.m., as regional politicians attempted to revive an economy dependent on tourists and partygoers. Revelers were allowed only to dance around a table with friends, rather than mixing with strangers — but the rules were not always observed.

In one notorious incident in early August, a performer was filmed spitting at dancers on a crowded dance floor at a beach club outside Málaga.

The venue was quickly closed, all nightclubs were ordered to shut two weeks later, and bars must now shut by 1 a.m. But critics fear the restrictions are still far too lax.

As beds continued to fill up in Málaga’s hospitals this weekend, residents were still cramming into bars along certain beach fronts until well past midnight. In some bars, the tables were tightly packed together — far closer than the current rules of two meters, or about six feet, allow.

At closing time, drinkers spilled out onto the beaches and pontoons, mostly without wearing masks. There they congregated in groups of more than 20 — a normal sight during any other Spanish summer, but far larger than the gatherings of 10 or fewer now allowed by law.

Some were teenagers who said they had recently recovered from a mild form of the virus, and who now therefore considered themselves immune. Others felt the pandemic restrictions were an overreaction.

“I don’t think Covid is real,” said Victor Bermúdez, a 23-year-old shop assistant at an early morning gathering on a pontoon jutting into the Mediterranean. “Well, yes, it’s real — but it’s not as serious as they say. It’s all a plan to kill the poor and boost the rich.”

During the lockdown, the central government set a clear agenda from Madrid. But with the lifting of the state of emergency at the end of June, certain powers were returned to each of Spain’s 17 regional governments, leading to a disjointed and confused approach.

When regions attempted to enforce restrictions on local life, some of their decisions were struck down by local judges, who argued that only the central Parliament had the power to introduce such measures.

“We don’t have the legal tools that guarantee us the ability to take decisions,” said Juan Manuel Moreno, the president of the regional government in Andalusia, the region in which Málaga lies.

The debate has also become the latest proxy for a bitter conflict over the Spanish Constitution that has been brewing for more than four decades. For federalists and Catalan separatists, for example, the debacle highlights how power was never properly devolved after the death in 1975 of the dictator Francisco Franco. For Spanish nationalists, it instead shows how the process of decentralization has already gone too far.

See also  Russia: 5 killed in massive fire at a huge warehouse in Moscow

“There is a kind of war going on to show what kind of political system is better,” said Nacho Calle, the editor of Maldita, a prominent fact-checking service. The decentralized approach has led to a piecemeal system of tracking and tracing potential coronavirus victims. Some regions employ several thousand trackers to trace people who might have come into contact with infected people, while other regions hired only a few dozen — slowing the rate at which potential patients are told to enter quarantine.

And even in regions with large numbers of trackers, like Andalusia, health workers on the ground report that the process is still too slow and understaffed in certain locations.

Francisca Morente, a nurse in a clinic west of Málaga, was one of hundreds of local nurses seconded this summer to work as a tracker because of staff shortages at her district’s official tracing unit.

But even now, Ms. Morente is one of just five trackers working at her clinic — not enough to make the hundreds of daily calls that a proper tracing service requires. And even once she manages to track down potential coronavirus patients, those patients still currently need to wait a week until their tests are processed, because of bottlenecks at local laboratories.

“We need more trackers and more resources,” she said. “We need a designated tracker unit in every clinic, instead of this temporary system that we have at the moment.”

A lack of institutional support for undocumented migrants has also contributed to the second wave, according to some experts. Some recent outbreaks began among foreign farmhands living in cramped communal accommodations.

Barred from seeking unemployment benefits and lacking formal labor contracts, undocumented migrants cannot easily take time off work if they are sick. Nor can they afford the kinds of homes that would allow them to easily self-isolate.

“If I have to quarantine, then I cannot work,” said María Perea, a 50-year-old Colombian cleaner waiting on Monday for the results of a coronavirus test. “And if I cannot work, then I have no money.”

But in general, doctors say that Spain is in a far stronger position to fight the virus than it was in March.

National coordination is improving — the central government last week agreed to a deal to deploy 2,000 soldiers as contact tracers. Testing speeds are accelerating — in Málaga, the biggest hospital can process tests within a single morning, thanks to the recent purchase of a series of robots. Across the road, a makeshift hospital built in a rush in April stands empty, ready for a rise in cases.

“It’s not like the first wave,” said Carmen Cerezo, 38, a train attendant waiting outside the Málaga hospital while her father was tested for coronavirus inside.